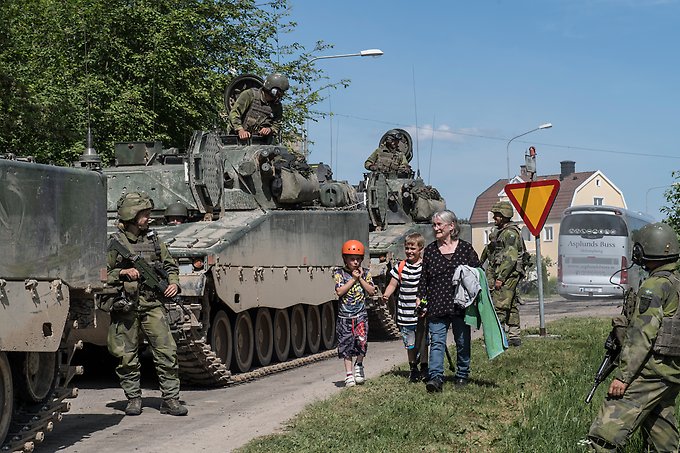 The legal protection of civilians against threats, compulsions and other communication influence activities in armed conflicts is strong. This is shown by Pontus Winther in his newly published doctoral thesis.

“For example, in the news reporting from Syria, there is talk about the warring parties making threats to healthcare personnel. It seems that few people reflect about the fact that such threats may actually be violations of the laws of war, and even being punishable”, says Pontus Winther, researcher and director of studies in law at the Swedish Defence University. He wrote his thesis on the legal protection of civilians from communication influence activities during armed conflict at the Department of Law, Uppsala University.

Digitalisation has meant that modern warfare often includes online propaganda to achieve military or political objectives. It has long been established that the laws of war (also referred to as international humanitarian law) provide civilians legal protection against physical violence in war. In his research, Pontus Winther has analysed the corresponding rules concerning the protection of civilians against non-physical acts in the form of communication influence.

“Despite the opposite sometimes being asserted, the general conclusion is that there is a relatively extensive legal protection for civilians against communication influence in war”, says Winther.

Difficult to get an overview

According to Winther, the existing rules are spread across a broad field of law. This makes it difficult to get an overview of the full scope of the rules.

Is the law unclear?

“No, but its complex. Only when one understands its complexity can one use the law in practice. For example, there are different rules for international armed conflicts, civil war and occupation,” says Winther.

“Military manuals that regulate communication influence activities are often very general. The understanding of national armed forces in the area may therefore be limited”, he says.

“There are reports about cases in eastern Ukraine where Russian-supported rebels portray Ukrainian politicians in degrading ways on digital bulletin boards around the cities, for example. This may be a breach of the laws of war”, says Winther.

As mentioned, the thesis shows that the legislation is complex in terms of threats of violence and other influence activities.

“Sometimes, parties to an armed conflict have a right under the laws of war to induce civilians to do things against their will. For example, in certain circumstances parties may have a right to compel civilians to move if a military operation will be carried out in a certain area,” says Winther.

A further aspect that indicates the complexity in this field is the fact that the rules sometimes only apply to certain categories of civilians.

“For example, for a party to induce children to report the movements of an opponent by devising an app game that encourages them to take and send in pictures of the adversary’s combat vehicles may perhaps be perceived as something harmless. But such reporting may be considered to amount to participation in hostilities, and parties to armed conflicts must not encourage children to do that. The same rules, however, do not exist for adults, since children are granted special protection under the laws of war”, says Winther.

In addition, Winther explains that communication influence activities may sometimes constitute cruel and inhumane treatment, or even mental torture. Winther exemplifies this with a situation where a person is filmed being subjected to abuse and where the film is later sent to a relative.

“In such cases, not only is the abuse itself a war crime. The fact that a relative has been made to view the video recording of the abuse may constitute cruel or inhumane treatment, or even straight out torture of the relative” says Winther.

Who will have use of these research results? The Swedish armed forces are interested in this knowledge. Not least to get clarity concerning where the boundaries are for permitted communication influence.

“With good knowledge of the laws, the details of the rules can be used, and States’ armed forces can reach a higher operational effect with their communication influence operations”, says Winther.

“These organizations have indicated that their staff are often subjected to various kinds of threat and coercion. Journalists, medical personnel and international organisations are, of course, also served by knowing that certain communication activities that are directed at them are actually illegal,” says Winther.

Lastly, war is war after all, why is it important to understand the laws of war at all?

“The laws of war exist to, as far as possible, minimise the human suffering in armed conflicts, whilst at the same time allowing for effective military operations. Therefore, it is important to understand them,” says Pontus Winther.

The Professor who came in to the cold He wanted to provide new perspectives in the Swedish NATO debate, but was called naive and a traitor. It was an unpleasant experie...
Professor Jann Kleffner appointed Extraordinary Professor Jann Kleffner, Professor of International Law and Head of the Centre for International Operational Law, has been appointed Extraor...
Between Salafism and Salafi-Jihadism – Influence and Challenges for Swedish Society Researchers at the Swedish Defence University have published a report commissioned by The Swedish Civil Contingencies Agency (MSB)...