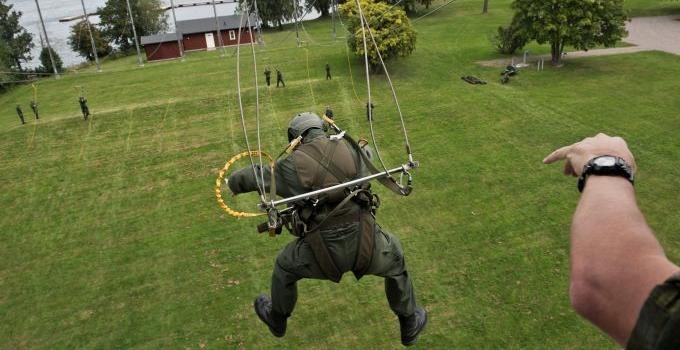 Completing and passing military parachute training gives future officers greater confidence in their ability to lead in stressful conditions. This is shown by David Bergman's dissertation, in which he followed three cadet cohorts who underwent parachute training at the regiment in Karlsborg.
“But failing to pass the training leads to a corresponding negative effect, which shows the need for personal follow-up during the training period”, he says.

One of the challenges in training military leaders is to prepare them for the extreme stress of a real combat situation.

“It is a paradox we work with. We cannot expose the cadets to combat, but the combat situation is normative and that is what they should be prepared for. The challenge is to find educational elements that are as stressful as possible, within ethical limits”, explains David Bergman, teacher and doctoral student in leadership at the Swedish Defence University.

To practice stress management in extreme conditions, different types of exercises are used in the training, such as fencing, diving, close combat and skydiving. Dealing with a difficult task can increase the individual's confidence that other tasks with equal or more difficulty can be overcome in the same way.

“This has been done by proven experience for a long time. The training in skydiving, for example, has not changed since the 1950s. We think we achieve the wanted effects, but this is not substantiated by scientific review.”

The training in skydiving has not changed significantly since the 1950s. Photo: Karlbergs slottsarkiv.

David Bergman, who is a major himself and underwent parachute training as a cadet approximately 20 years ago, began to investigate whether there were any scientific studies that showed that parachute training actually gives the believed effect, such as increased self-efficacy, self-confidence and ability to overcome fear.

“I felt that parachute training made me grow in a way that I could not really explain. But it turned out that there was little research in this area, apart from an American study from the US Air Force Academy in Colorado Springs that I used as a model and replicated for Swedish conditions.” 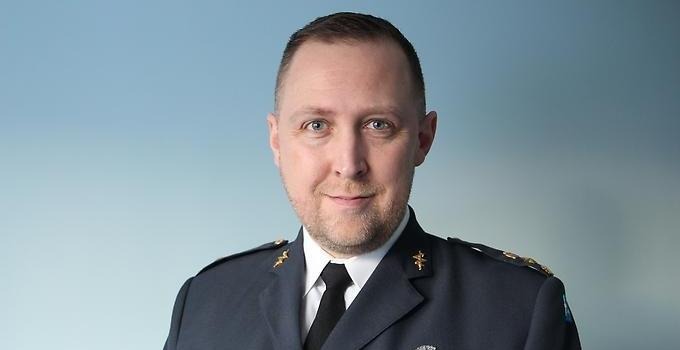 David Bergman, major and teacher at the Swedish Defence University.

The study for the dissertation, which consisted of three sub-studies, was based on analyses of how three cadet cohorts assessed their ability to act and lead in extreme situations before, immediately after and five months after completing training in military skydiving. The army cadets, about half of all participants, received training in skydiving, while the other half, who were naval and air force cadets, formed a control group and received different training in their respective services.

The results show that the group that parachuted improved significantly during the course and that this effect lasted. The control group also improved, but not significantly.

“When we look at self-efficacy, we examine different domains, or areas, where you have confidence in your own ability. Here it turns out that the self-efficacy you feel after the parachute training clearly spreads to other domains. Passing the training is such a great personal achievement that you gain more confidence that you can also cope with other difficult situations and become a better leader.”

For those who fail parachute training David Bergman sees a similar, but negative, effect.

“Those who fail get a negative transfer of training in the same way, which demonstrates the importance of personal follow-up during the training period. Today this does not work satisfactorily. There is no systematic follow-up or opportunity to, for example, retake the course and have a chance of succeeding the next time around.”

“Studies such as this one provide a scientific basis for education and further insights into the proven experience we already have. The results are also relevant for other occupational groups working in extreme conditions, such as the police or emergency services.”

David Bergman defended his dissertation Why jump out of a perfectly good airplane? Parachute training, self-efficacy and leading in combat on March 26, 2021 at the Department of Psychology, Stockholm University.