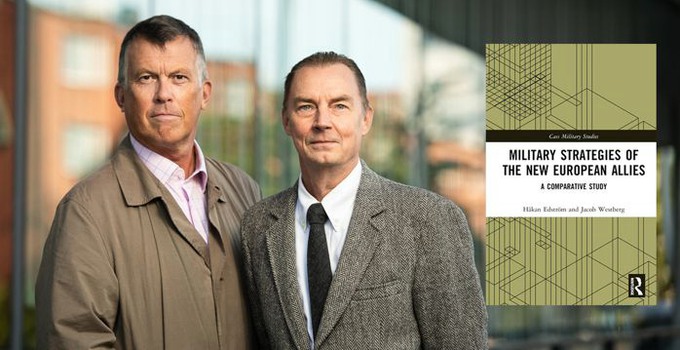 The new book is the fourth and final volume in a series on countries' defense strategies by Håkan Edström and Jacob Westberg.

In a new book, researchers at the Swedish Defence University analyse how and to what extent eleven countries in Eastern Europe have adapted their defence strategies since joining the EU and NATO. They also look at how differences and similarities between the counties’ strategies can be explained.

Between 1999 and 2013, the EU and NATO expanded in four phases as eleven Eastern European countries were included in both organisations. While the countries share some comparable historical experiences (such as communist dictatorship during the Cold War) that might explain similarities in behaviour and action, their strategic adaptations are far from uniform.

In the book Military Strategies of the New European Allies: A Comparative Study, Jacob Westberg, Associate Professor of War Studies, and Håkan Edström, Associate Professor of Political Science, analyse the reasons for these differences and introduce three variables that can explain the strategic behaviour of states. These are differences in relative power and position in the international system, the geographical location of states, and historical experiences related to state-building processes, wars and armed conflicts.

"We analyse countries' defence strategies through a structured comparison of official strategic documents. Theoretically and methodologically, we introduce an analytical framework that makes it possible to explain both similarities and differences", says Jacob Westberg.

One thing that surprised the researchers was the slow pace with which many of the countries made adjustments after joining NATO and the EU.

"We thought that this transformation would be much faster. With membership, there is pressure to transform, not only when it comes to defence policy, but also in terms of adjustments linked to EU membership. But it turned out that in many countries there was a reluctance to do this once they became members", says Håkan Edström.

"This is also where differences between countries become quite clear. While the more resourceful states such as the Czech Republic, Poland, and Romania have been able to deliver on their promises, small states have had less to offer. Many of the smaller states, such as Slovenia, are also more embedded in the NATO landscape, and thus have very little incentive to implement changes", explains Jacob Westberg.

Another finding from the research is linked to the geographical features of the countries in question. Those sharing a land border with Russia, for example, have been less inclined to let go of national defence.

"Countries such as Poland and Estonia were also among those who reacted most strongly to the 2008 war in Georgia", says Jacob Westberg.

The book also analyses the attitude that the countries take to the roles of the US and the EU, and here too geography, and to some extent historical experience, are important.

"The countries that perceive Russia to be a superpower-threat recognize that they need help from another superpower, namely the US, and, as a consequence, they draw closer to the latter. Then there is the summary variable of strategic vulnerability, which is about geography, access to own military resources, and historical experience. Countries such as Poland, who see themselves as strategically vulnerable, tend to view the US as a very important ally", says Jacob Westberg.

"In the case of Poland, we also believe that the experience of the Second World War plays a role. The country was caught between Nazi Germany and the Soviet Union, and despite promises of help from great powers such as France and Britain, it never arrived. This may be one of the reasons why there is such a strong desire not only to be an ally of the US but to have an actual American military presence in the country", says Håkan Edström.

The countries' different strategic adjustments can be explained by a combination of variables.

"We discuss how states perceive themselves to be more or less strategically exposed. In this case, geographical location and historical experience can be reinforcing factors. Moreover, if the state is a small player in the international system and is relatively resource-poor, it may perceive itself as strategically vulnerable. This applies to the three Baltic countries, for example", says Håkan Edström.

"But even here we see differences; Lithuania, for example, was much more inclined to focus its military capabilities on contributing to international operations than Estonia was, although this has changed since 2014", says Jacob Westberg.

The ongoing war in Ukraine means that some countries have become frontline states against Russia, something that has provoked changes in the attitude to the development of military strategy.

"The Ukrainian war is something of a strategic shock. Previously, four of the analyzed countries bordered Russia - Estonia, Latvia, Lithuania and Poland. With the war in Ukraine, we have four new frontline states - Slovakia, Romania, Hungary and Bulgaria", says Jacob Westberg.

The current book - Military Strategies of the New European Allies - is the fourth and final volume in a series on the defence strategies of different countries. The previous books in the series, all published by Routledge, are:

How can Swedish laws of crisis and war be improved? In Sweden, peacetime crises, war, and the threat of war are regulated in different ways and managed in separate systems that fall ...
2.9 million to research project on intelligence networks in 16th-century Sweden Martin Neuding Skoog, Associate Professor of Military History at the Swedish Defence University, has been awarded a project grant ...
This year's Hugo Raab Award goes to Charlotte Wagnsson Charlotte Wagnsson, Professor of Political Science, has been awarded the 2022 Hugo Raab Award, the Swedish Defence University's aw...