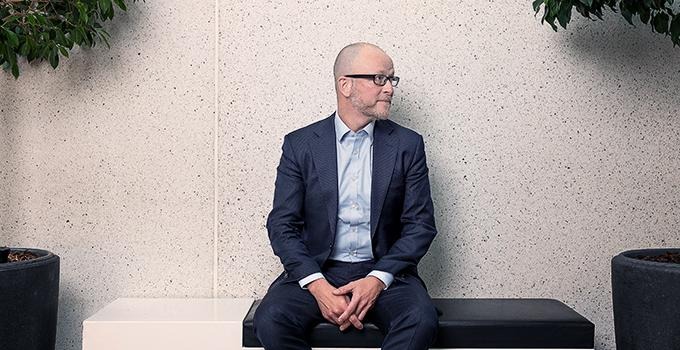 The law continues to fascinate him

Jann Kleffner, professor of international law at the Swedish Defence University, took an early interest in the subject of law.

"I grew up in the German tradition of law, which is a lot about systematic analysis, formal logic and rigour in interpreting and applying the law. It is something that has always attracted me", says Jann Kleffner and illustrates this with an anecdote about how he read a book by a German legal theorist, Karl Engisch´s ‘Introduction to Legal Thinking’ during a summer vacation in Scotland before he started studying law:

"It was not really what many would consider bedtime literature. The book was very dry and formalistic, but somehow it fascinated me."

When he started his legal studies in Germany, he soon became interested in international law, which consists of rules and principles that govern states and certain other international actors. He then deepened his studies in various sub-areas of the field during his continued studies, both in the United Kingdom and the Netherlands.

"From there I focused more and more on the darker side of the human condition. How international law, which is a horizontal and highly decentralized area of law, plays out in fragile and volatile environments such as armed conflict and crisis."

"I find it interesting how the two fields, and other fields of international law that are applicable in times of armed conflict and crises, interact and ‘fit’ into the broader system of general international law."

An internship at the TMC Asser Institute, a research institute in The Hague, where he had the opportunity to work on a publication on the law of armed conflict (the Yearbook of International Humanitarian Law), strengthened his interest to continue working on these issues.

"The legal environment in the Netherlands, with the International Court of Justice, international criminal tribunals and several international organizations in The Hague, is very international, dynamic and open. And while working at the Amsterdam Center for International Law at the University of Amsterdam Law School, we developed some interesting initiatives to capitalize on that environment, for instance by organizing academic conferences, launching lecture series, initiating international research projects and expert processes."

During his studies and his first academic appointments at the Universities of Amsterdam and Leiden, he had the opportunity to not only work with law ‘in the books’ but also in practice, such as providing legal advice to law firms in domestic court cases and to international and civil society organizations.

Jann Kleffner joined the Swedish Defence University in 2009, and his research focuses on various aspects of international operational law, including the law of armed conflict, the law on the use of force in international relations and human rights law in armed conflicts and crises.

"I am also interested in responsibility issues, such as the responsibility of states, international organizations and individuals in the realms of those bodies of law, and of various aspects of compliance with the law. One particular strand of research in that area is addressing non-state organized armed groups and how the law applies in armed conflicts between them and states or other such armed groups."

As part of this strand of research that Jann Kleffner has worked on during a number of years, he has recently written a chapter in a new book - Military Operations and the Notion of Control under International Law - that touches on organized armed groups, in this case the Islamic state (ISIS). The starting point is that international law does not have a well-established legal framework for holding organised armed groups responsible as collective entities.

One of the major issues is that you have to be able to attribute what is being done to the entity in question.

"In this case, when we look at ISIS, one will have to determine whether a given act of an individual or a group of individuals is attributable to the group. For instance, when parts of the ISIS ‘administrative infrastructure’ that it relied on to exert control in Syria and Iraq, such as its moral police force, mistreats an individual, is that act of mistreatment to be considered one of ISIS as a legal entity? Or if an individual or group of individuals that pledges allegiance to ISIS, commits a terrorist act and ISIS subsequently ‘accepts’ that pledge or the act as one of its own, does the terrorist act become attributable to ISIS?"

The article argues that if and when ISIS exerted control over territory and people in a way that resembles state control, then acts can be attributed to ISIS in a similar way as they can to states. As a consequence, ISIS as an organisation would be held responsible for violations that had been committed by individuals who act as its organs, or under its direction or control

"At the same time, we argue that such an analogous application of the rules on attribution needs to be approached with caution and the necessary nuances that take account of the differences that exist between states and non-state organized armed groups such as ISIS, such as their more unstable character."

To discover nuances and challenge perceptions

And it is precisely this in- depth work and the possibility to understand and discover new things that motivate Jann Kleffner.

"First of all, it´s curiosity. I like to think things through and discover the nuances in a problem. I find it very stimulating to challenge perceptions, to really try to understand the intricacy of a problem and ultimately discover new things that can expand our knowledge about international operational law."

But his interest goes beyond the purely academic.

"After all, this area of law applies in situations regularly characterized by organized armed violence where the law informs life and death decisions. Its practical import is in that sense ‘tangible’, to say the least. It is this link between academic research and the practical and real-life consequences that inspires me."

Current projects: Exploring the Twilight Zone of the Law of Armed Conflict; International Law and Ethics of Coups d’État

In my spare time: Hunting and tracking wounded game, cheering on my children during hockey, innebandy and football matches