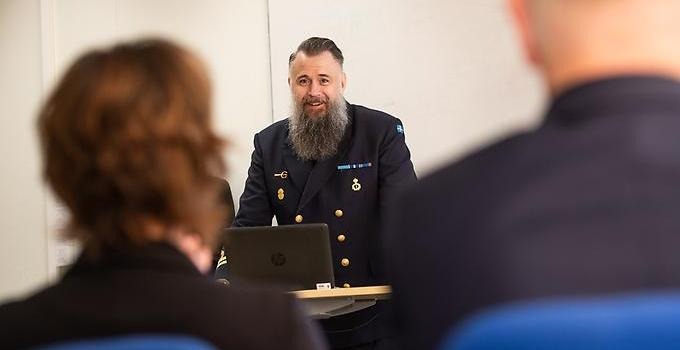 Patrik Hulterström giving a presentation for the Swedish Minister for Higher Education and Research, Malena Ernkrans, during a visit to the Swedish Defence University.

From coastal ranger to combat diver to the Swedish Defence University

Patrik Hulterström has dedicated his life to the military. He is now writing his doctoral dissertation on wargames.

“If there’s one thing we don’t want, it’s war. If we don’t want it, we must understand it as a phenomenon,” he says.

When Patrik Hulterström, 47, talks about his childhood, one might think that a military career was almost inevitable. He spent his summers in the Åland archipelago, on boats and armed with an air rifle, fantasising about becoming a military man, lured by nature, the sea and adventure.

From the kitchen window of the family home on Kungsholmen he could see the military academy at Karlberg Palace and would often cross the canal to play there.

“I found empty casings and saw the cadets exercising in the park. I used to lie in the bushes, throwing pinecones at them. Just before I arrived at the Swedish Defence University, I worked as a platoon commander at Karlberg. The circle was complete. It was from there I was recruited to the university as a teacher, before I began my PhD,” he says.

Before Karlberg, Patrik Hulterström completed his national service as a coastal ranger in Vaxholm, after which he trained as a combat diver.

“I loved the training. Being with the combat divers and coastal rangers was really enjoyable. Hard work, of course, but incredibly rewarding to find out that you have it in you. You’re always challenging yourself in various ways,” he says. “Two days after being demobbed I signed up again as a cadet on a preparatory officer course. It was six months before I began at the naval officers’ college in Karlskrona. I then applied to become a combat diver, something that had always interested me. So, basically, I repeated basic training.”

While Patrik Hulterström subject at Åbo Akademi University is philosophy, at the Swedish Defence University he is studying for a PhD in War Studies.

“War studies is the study of combat and the exercise of military might. It is an interdisciplinary subject covering both combat itself and the factors that affect operations. It often looks at society as well. It is a fairly broad area and one can find a great many fields to study.”

Patrik Hulterström has chosen to study wargames, the very definition of which is a matter for some debate.

“Wargames are quite difficult to define. Personally, I require an abstraction, the use of some kind of map and symbols that represent units and weapons systems, for example. This can be used in combination with real exercises in which units are represented in the game, but fundamentally the abstraction should be there,” he says.

Why did you choose wargames for your PhD?

“If there’s one thing we don’t want, it’s war. If we don’t want it, we must understand it as a phenomenon. If we do end up in one, we would like to deal with it in the best possible way, with the least possible suffering. Hopefully, with sufficient knowledge, war may become obsolete.”

When teaching cadets, Patrik is careful to remind them of the consequences their decisions might have in a real conflict.

“In the wargame, it’s only a symbol but in reality, it’s a ship or a battalion of people and all of them disappear. The lives of a great many people are at stake,” he says.

At the Swedish Defence University, Patrik Hulterström has discovered a platform on which he can share the experience and knowledge he has gained over the years.

“What I find cool, exciting and challenging is the opportunity for self-improvement while at the same time disseminating knowledge to students at the Swedish Defence University. In particular, knowledge of wargames and the benefits of philosophy to war studies,” he says.

Someone like Patrik Hulterström who has dedicated their life to the military will inevitably encounter prejudice. According to Patrik himself, the most common form is that violence acts as some kind of driving force.

“For me, it’s quite the opposite. Of course, when you’re young you think it’s great to shoot and blow things up, but not to harm anyone. I became an officer because I don’t want war. We need a military that can ensure that we can continue to live life the way we do. Hopefully, in the future it won’t be necessary but that is probably far away,” he says.