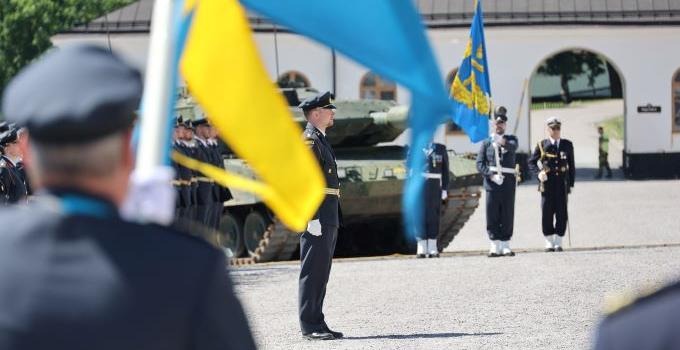 In a study published in the journal Armed Forces and Society, researchers at the Swedish Defence University investigate how newly graduated officers and specialist officers experience joining the Armed Forces. The results show a high workload, unclear structures and a gap between expectations and outcomes.

The Swedish Armed Forces has experienced strong growth for some years now, with the war organisation being expanded, several regiments and air wings re-established and the number of conscripts increased. In a new study, Joel Nilsson and Johan Österberg interviewed newly graduated officers and specialist officers to investigate what it is like to begin careers in an organisation that is growing so rapidly.

"There is much research on how organisations in growth affect leadership, employees and operations, but relatively few studies examine the Swedish and military context", says Johan Österberg, PhD in psychology and co-author of the study.

"What it's like to be new at work is a popular area of research, but what makes this study particularly interesting is that we analyse the tipping point when an organisation goes from many years of downsizing and unit shutdowns to suddenly changing course We also look at how this affects the individuals at the top of the organisation. This is a perspective that is rarely seen in organisational research, as it often tends to be based on the perspective of management when organisational changes take place", says Joel Nilsson, research assistant in leadership and the study's lead author.

The officers and specialist officers interviewed had a clear picture of their professions and had high expectations when joining the Armed Forces, but in many cases there was quite a gap between expectations and outcomes. Several new recruits testify to staff shortages, structures not in place and unclear mandates.

"The conditions are different in different units, and it also depends on what role you step into. Some interviewees describe that they have been supported by senior officers and have therefore not been negatively affected by the organisational changes, while others have not quite settled into their professional role and have not had the opportunity to deepen their professional knowledge in the way they had wished to. They may have expected a leadership role, and when they don't get it, they end up in limbo and don't know how to move forward", says Joel Nilsson.

High workloads combined with unclear expectations and inadequate structures for coaching and support can result in a difficult start of career. The concept of career time is used by the informants in the study, i.e. hours that employees work voluntarily in order to complete their tasks, which is seen as an investment that benefits their own career rather than the organisation.

"This is referred to as an investment in one's own career, and it is how employees legitimise working more and ”going the extra mile”. At a time when there are many tasks yet staff shortages, the result is a high workload. We consider employees experiencing an imbalance between assignments and existing resources problematic. If this continues, it can have consequences, such as employees becoming burnt out or choosing to leave the Armed Forces", says Joel Nilsson.

Rapid career advancement can lead to loss of skills

The organisation's growth may also result in an increased need to fill senior positions at a rapid pace as experienced officers retire.

"It can become a form of careerism. We know that there will be many vacancies in a few years, which means that future leaders will need to advance their careers faster with less time in each position. At the same time, many people we've talked to agree that you can't learn to be a manager, you need experience. But when you don't have time to acquire experience, the organisation could lose experience and knowledge", says Johan Österberg.

Both Joel Nilsson and Johan Österberg believe that the results of the study are logical given the situation the Swedish Armed Forces find themselves in.

"This strategic direction for building up the defence in the coming decades affects the Armed Forces in several ways. Our study points to the risks of focusing too narrowly on growth, which risks undermining the human aspects and professional identity", says Joel Nilsson.

"There is a risk that the Armed Forces are chasing their own tail by trying to increase the number of personnel while at the same time being unable to retain existing personnel and knowledge", says Johan Österberg.

To counteract this trend they propose, among other things, more systematic management of older officers' skills and coaching and mentoring for newly recruited officers.

"I believe that this study could lead to further investigation, and also be useful for other armed forces facing similar challenges", says Joel Nilsson.

The 35 interviews upon which the study is based were conducted during 2019 and 2020 in various units of the Swedish Armed Forces. Johan Österberg emphasises that this is a qualitative study and that the aim is not to generalise.

"For this type of research question, where a deeper understanding of the attitudes and dynamics of an event - in this case new officers entering into the workforce - is desired, interviews are well-suited. But we will follow up with quantitative studies later on."

Professional Socialization During Restructuring: A Study of Workload and Career Time, Armed Forces and Society.