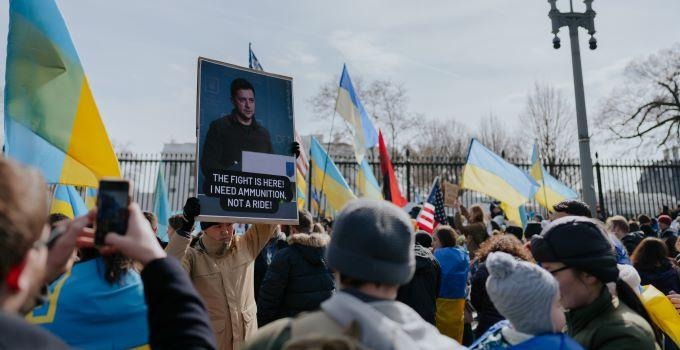 Despite an imminent threat to his own life, Zelensky has chosen to stay in Kyiv. Good leadership is built on symbolic actions, according to Sofia Nilsson.

Leaders are tested in times of crisis. A prime example is Ukraine's President Volodymyr Zelensky, whose leadership style has drawn widespread praise.
"He has a transformational leadership style which, as research shows, produces the best results", says Sofia Nilsson, leadership researcher at the Swedish Defence University.

The world has been surprised by the resilience of the Ukrainians in the face of the Russian invasion. At the centre of the resistance is the country's president, Volodymyr Zelensky, who has emboldened citizens with daily speeches and updates on Instagram from the presidential palace in Kyiv. In the run-up to the invasion, many were doubtful about how a president with a background as a comedian would handle the worst crisis a leader can face. But Zelensky has convinced his doubters.

"He practices what we in the research community call transformational leadership. It is the type of leadership style that research has shown produces the best results. It has been disputed whether this type of leadership works as direct leadership in war or in serious crisis situations - it can be difficult to be inclusive and caring when you are on the ground in the heat of battle. But at higher levels of war it is effective to take a transformational approach to leadership and be a role model", says Sofia Nilsson, Associate Professor and Senior Lecturer in Leadership and Management at the Swedish Defence University.

Despite an imminent threat to his own life, Zelensky has chosen to stay in Kyiv. Good leadership is built on symbolic actions, according to Sofia Nilsson. It is through such actions that the leader can instill courage in the people. The fact that Zelensky has chosen not to hide sends strong signals.
"It's very much about setting an example, and standing up for humanitarianism and fundamental values. As a leader, you have two different processes of influence - the direct and the indirect. In a war, the possibility of direct influence is limited; instead, you have to use indirect channels. Zelensky does this in an exemplary manner. He is very personal and uses technology skillfully. He speaks to the nation almost daily, something that has become very important in the war."

How is efficient crisis communication designed and disseminated?

"Above all, crisis communication is about safeguarding the public's well-being. To ensure this, leaders and agencies need to base their authority on a foundation of well-established credibility and trust, as well as relevant information about citizen needs in any specific crisis. In addition, information needs to be disseminated in the right channel in a factual and straightforward manner."

Sofia Nilsson talks about psychological warfare as an important aspect of this war. Joe Biden is said to have been careful to pre-empt Vladimir Putin’s strategy and make public certain intelligence before the invasion began, which weakened Putin's case for invasion and may have ultimately damaged the morale of the fighting Russians. Leaders actively work to boost their own or weaken their opponents' morale, something Zelensky has shown a penchant for.

Putin’s way of running his country is very different from Zelenskyj’s.

"When we talk about leaders like Putin, we usually talk about transactional negative and destructive leadership. Such a leadership style works towards a very clear vision, but it's also very focused on controlling people. Putin uses punishment and fear as tools. He leads by suppressing and undermining dissent. He gives his view of the truth and those who disagree are removed or arrested."

While this has been an effective way to lead in a country like Russia, there are risks associated with a leadership that seeks to instill fear and uncertainty, especially in times of crisis.

"At best, he gets people to do what he wants, but probably not out of any great motivation, but out of fear. There were reports that soldiers sent to Ukraine did not know where they were going, and that when they found out, their will to fight plummeted."

But would Putin have fared better with a leadership similar to Zelenskyj's or vice versa?

"These are, of course, two completely different things. For Putin, it's about leading an attack that may be largely unjustified, and for Zelensky, it's about defending a country. While many experts question whether Putin is acting rationally, some maintain that he is, but that he may not have a true picture of the state of the world. There is information that suggests that money intended for the military has been misappropriated and that their equipment is not working. This suggests that the leadership did not work very well in the earlier stages either."

Are there any lessons to be learned from this for a Swedish company commander, for example?

"Absolutely. It's about interpersonal interaction and what motivates us as human beings. It comes down to similar processes, even though the context is a lot less extreme. Also in these more familiar environments, we need leaders who see us and care about us, and who live as they teach."