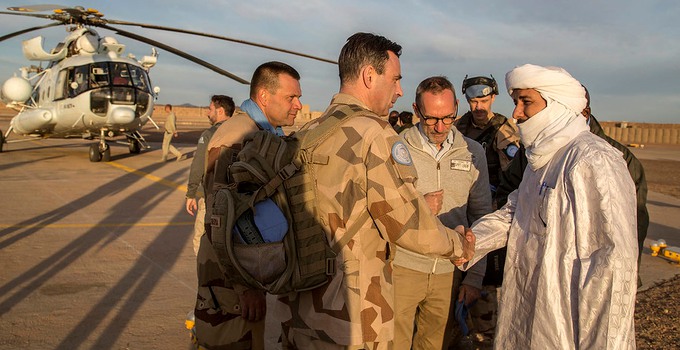 Dennis Gyllensporre got the idea for the research project on military diplomacy after his time as commander of the UN military operation in Mali, Minusma. Photo: UN Photo/Marco Dormino

To be commanding international military operations does not only entail the leading of soldiers. Instead, it tends to demand an expansion of duties to include the role of mediator or negotiator, for example in conflicts between warring parties or when negotiating peace agreements. The nature of this type of military diplomacy is an issue currently being investigated in a research project at the Swedish Defence University.

"Mediation and negotiation are tasks that civilian diplomats are expected to perform, but military personnel sometimes need to engage in different forms of diplomacy that may not be so visible and that differ from civilian diplomacy", says Håkan Edström, associate professor and senior lecturer in political science, who is leading the ongoing research project on military diplomacy at the Swedish Defence University.

Channels for discussions and negotiations

Military diplomacy is often about creating channels for dialogue. Sometimes you need to tone down a conflict or create a neutral venue where parties to a conflict can meet.

"In a country where there is a UN-led operation, or perhaps a military coup, it may sometimes be easier for a military leader to talk to another general rather than a civilian diplomat", says Håkan Edström.

He gives several examples of peace agreements and decisive settlements in international conflicts being reached by military representatives, such as when Japan surrendered at the end of the Second World War.

"It was to General McArthur they surrendered, and when Germany was divided into occupation zones during the Second World War, it was field commanders who took on the role of diplomats", he says.

Dennis Gyllensporre, Lieutenant General and Associate Professor of Political Science, got the idea for the research project after his time as Commander of the UN military operation in Mali - Minusma - during the years 2018-2021. As Military Commander of the UN operation, he was not only in charge of more than 13,000 soldiers, he also led the committee responsible for the practical implementation of the peace agreement between the three parties - the Malian transitional government and the opposition groups la Coordination des mouvements de l'Azawad (CMA) and la Platforme.

"This was an agreement signed by all three parties to the conflict, and it was the result of negotiations that had been going on for three years", says Gyllensporre.

He also dealt with incidents arising from armed conflicts and had many contacts with the defence forces of other countries.

"The mediation missions became part of my everyday life, and it's something I've reflected on a lot since I left the mission."

Gyllensporre is currently writing a book about his experiences and developing his ideas in the current research project.

"In the book, I highlight how ideas and experiences can be shaped as policy recommendations, including how the UN could work on this in a more formalized way. The book also explores a theory on military diplomacy, and one of the aims of the research project is to test these ideas in the real world", says Gyllensporre.

To get a better idea of what military diplomacy actually is, the two researchers are gathering empirical evidence, both by mapping ceasefires and peace agreements concluded over the past 20 years, and by interviewing commanders of international operations in different parts of the world. This last spring they visited the UN's Untso operation in the Middle East, and if all goes according to plan they will meet commanders of UN operations in Yemen, Lebanon and Syria, as well as OSCE operations in the Balkans and in Moldova.

"Collecting material is not easy, as it often includes sensitive data from negotiations. So we have to be careful and respect the processes. It also entails quite extensive preparations, in terms of both security and bureaucracy in connection with travel in regions where there is conflict", says Håkan Edström.

Dennis Gyllensporre also highlights the security aspect, pointing out how researchers can easily become seen as suspicious in sensitive environments. He recounts how he once had to cut a trip short because of complications that arose when his work was misunderstood.

"These were both unfortunate and difficult circumstances in a sensitive and tense situation. However, the misunderstandings were resolved and the situation was handled well. After all, what we are interested in is how the UN works, not what the various parties to a conflict do on the ground. Military activities are also often linked to confidentiality and parties to a conflict are particularly vigilant about how information can be used. It's just a difficult environment to operate in and it demands a lot from those who go out", he says.

One of the reasons why military diplomacy can be effective in certain situations is that it uses slightly different methods than traditional civilian diplomacy.

"Militaries are used to working in a solution-focused way and finding ways forward when political processes have stalled. But there are still many questions to be answered about how this really works", says Dennis Gyllensporre. He continues:

"There is almost no research on military diplomacy, so hopefully what we are doing now can contribute to new knowledge that can be useful within the UN and defence forces in different countries. Today, there is no conceptual basis to stand on when dealing with important mediation missions. Ultimately, it is about the military profession and what an officer can be expected to be able to do. It is not always enough to be good at leading soldiers, you may also need to be able to mediate and negotiate at a high level in sensitive conflicts."

"The project aims to highlight a previously invisible part of the officer's job, and hopefully this is something that can be incorporated into officer training in the future", says Håkan Edström.