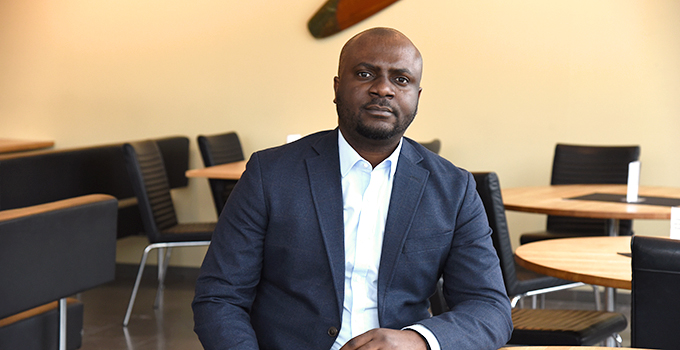 Akinbode Fasakin defended his PhD thesis "Subaltern Securitization - the Use of Protest and Violence in Postcolonial Nigeria" on 28 January 2022.

Akinbode Fasakin’s PhD thesis investigates subaltern security issues in postcolonial Africa with a special focus on Nigeria. Based on a synthesis of securitization and Fanonian decolonial theories, he examines how citizens in Nigeria succeed in raising security issues so that they appear on the political agenda.

"Within this field, there is a growing concern that the subaltern – in this context ordinary and marginalised people – find it difficult to construct threat to their security because they cannot speak, and even when they speak, they cannot be heard by powerful state actors. So I focus on how the subaltern can rise above the limitations that they face and raise their security concerns as threats to their security. This suggests that if words do not work for the subaltern, they seek alternative ways such as protest and violence to make themselves heard", says Akinbode Fasakin.

Securitization theory is an International Relations theory that describes the process whereby state actors transform issues from normal political issues into extraordinary matters of national security through the use of speech. This is known as the process of constructing threats to a referent object, i.e. something that has a duty to survive, for the sake of national security. In his thesis, which is based on analyses of published text and interviews, Akinbode Fasakin describes two ways in which citizens in Nigeria have been able to raise security issues to national and international levels.

"One way is to participate in protests and demonstrations. I show examples of how people decide to use protests to force the government to see how the removal of subsidies on fuel is a security problem for them", he says.

When the subsidies were removed in January 2012 it was perceived as constituting a threat to people’s security. A lot of the population relied on fuel for their daily activities and the price of fuel determines the price of other products.

"The public came to the streets to protest in order to have the subsidy on fuel restored so that they could have their security restored."

"The Boko Haram resorted to violence as an instrument of securitization where speech did not work. Drawing on the political philosopher Frantz Fanon’s idea of decolonial violence, violence can be seen as a medium of political communication where there is abuse and violation on the marginalised people."

Akinbode Fasakin has seen a shift in the government’s reactions regarding the two cases he examines. In the first case, the government was forced to reverse its decision to remove subsidy on fuel, and in the second case the state prioritised the issues that gave birth to the Boko Haram insurgency and even went on to offer amnesty to the group.

"This doesn’t mean that they address the problems completely, but the government is paying attention and it gives the impression that the issues have gained some measure of priority at a national level. This indicates that it is possible for ordinary people to securitize and raise threats to their security through the use of protest and violence."

Why did you choose this topic for your PhD thesis?
"There are two reasons for this. The first is the existence of a theoretical gap in terms of how to understand how the subaltern securitize, particularly in a postcolonial context. This has not been paid any attention in securitization studies and many existing studies conclude that the subaltern cannot securitize."

"The second reason is that this study speaks to real life problems that ordinary people face about what they consider as their security concerns in a postcolonial context. There are many security concerns in developing countries contexts that are not being given any attention, either by the state or the international community. This needs some serious focus and scholars should be able to provide recommendations, for example regarding how to understand the Boko Haram crisis differently in order to deal with it better."

The main response from the government to date has been to confront the group with more violence, and one thing that can be seen through research is that such measures can elongate the conflict and lead to more loss of lives and destruction of property.

"If you understand that there is a socio-economic context around such a group, you’ll be able to deal with it differently. You’ll also be able to address the question of the state that is irresponsive to its population, which relates to the two cases in my thesis, where you see a real life problem that needs some new way of thinking. I believe that the subaltern securitization helps look at this from a new point of view."

Akinbode Fasakin (2022): Subaltern Securitization - the Use of Protest and Violence in Postcolonial Nigeria.