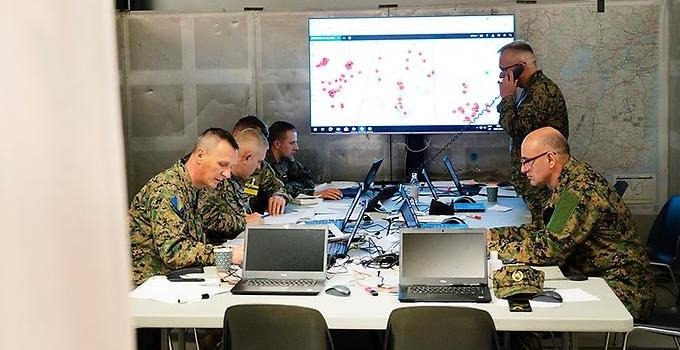 “The biggest challenge is the information flow”

The international staff exercise VIKING 22 has been completed with over 2,000 participants from five different countries. The main aim of this year's exercise was to practise different types of cooperation between civilian and military actors.

VIKING 22 is a computer-assisted gaming exercise with the aim to prepare military, civilian and police for participation in Peace Enforcement Operations. This year's exercise, 28 March to 7 April, was conducted in Brazil, Bulgaria, Finland, Qatar and Sweden comprising around 2,500 participants.

"Ukraine was also involved in the planning phase and had planned to participate in the exercise, but had to cancel due to the war", says Magnus Bodén, Lieutenant Colonel and Exercise Coordinator at the Swedish Defence University.

The game was led from Sweden and the main cohort of around 1,000 military, civilian and police personnel was based in Enköping, with additional participants in Uppsala, Karlskrona and Kungsängen.

The Swedish Defence University's role in VIKING is to develop the scenario and the game plan, this year the focus lay on conducting military operations within NATO and the UN context, in cooperation with the Swedish Armed Forces. The scenario is based on Nordic geography, but the content comes from modern conflicts.

"It is a traditional peace enforcement operation with a mandate for the use of force in a fictional country. It is not an armed attack, but the adversary is more qualified than, for example, rebel groups, which means a higher level of warfare on the NATO side. Within NATO, it is referred to as a 'non-Article Five operation", says Magnus Bodén.

"In this type of staff exercise, participants are organised into headquarters with different functions. When something happens, the participants have to react and act on it. They practise what decisions to make and how to plan and take into account different aspects of the conflict, both civilian and military", says Magnus Bodén.

"The main challenge is to make the information flow work, not only within each staff but also between the headquarters and the civilian and military components. In this exercise, we try to bring together the coordination between the NATO operation and the military and civilian operation conducted by the UN in neighbouring countries. The common denominator of the exercise is coordination between different actors", he continues. 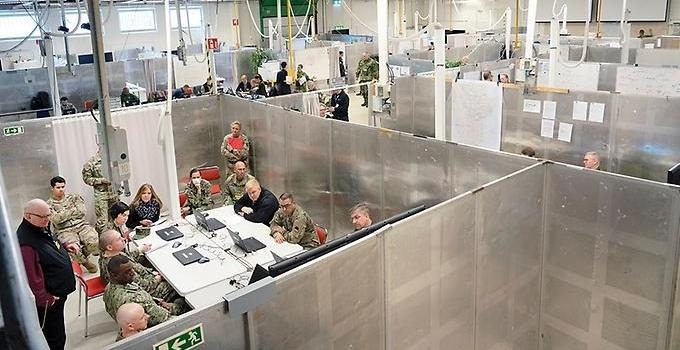 Training for students at the Advanced Command Programme

Martin Nordanskog is a second-year student at the Advanced Command Programme and he participated in the exercise in the role of Deputy Chief of Staff.

"In my role, I coordinated the work of our operational staff, and additionally coordinated our staff with others so that we had a common working process. For me, this meant preparing and facilitating meetings and supervising the work to identify any emerging needs of other members of the staff where coordination and other things were needed", he says.

Martin Nordanskog says that the game provides a good training environment where the content from the education can be put into practice.

"We were able to work with the problems and the professional challenges that we will face after our education. We could identify what is required in terms of practical work based on the problems we have previously discussed from different theoretical aspects."

For example, how to manage time constraints and what kinds of challenges need to be handled in the present, in the short term and in the longer term.

"We have not yet formally evaluated the exercise, but my impression is that it went well. There were some initial challenges, such as starting up the exercise and making everything work. It was a quick start-up with a lot of information to absorb, but things improved along the way", says Martin Nordanskog.

“A lot of fun and very educational”

Hugo Dooley is a student at the Master's Programme in Politics, Security and War with a focus on War Studies. He participated in the exercise as a political advisor to a specialised unit and to the Lieutenant-General. His role was to analyse the political consequences of various decisions and monitor the development of events. In addition, he updated the Lieutenant-General on the political situation, the implications of the NATO operation and the UN mandate.

"I also provided analyses of the political consequences of targeting certain critical military objectives and assisted with long-term planning", he says.

The role involved morning briefings for the headquarters and working closely with military participants. Before the exercise, he had to read up on a wide range of information about the fictional countries and the background to the conflict in the area.

"The scenario is very relevant considering the current world events. It was extremely fun and educational to be involved in the exercise. Although the days were long and stressful, it was interesting to test how what we have learned during four years of study works in the real world", he says.