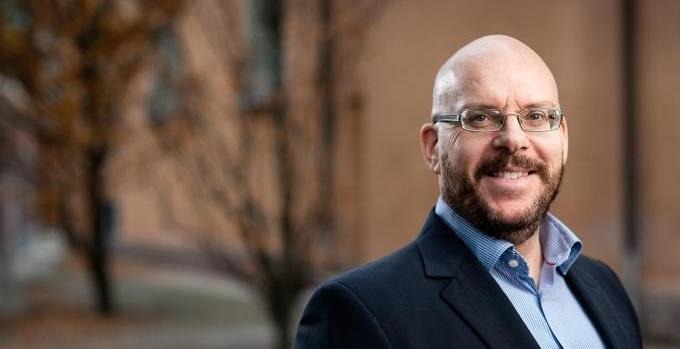 Jerker Widén is a Professor of War Studies at the Swedish Defence University.

He is looking to understand the nature and character of warfare

Jerker Widén is a Professor of War Studies at the Swedish Defence University. His research focuses on military theory with a focus on naval thinking.
"My work is focused on analysing theories about the use of military forces with the aim to understand the nature and character of warfare."

Jerker Widén works at the Naval Section in the field of warfare and studies and his research is centered on what leads to success in naval warfare and naval combat.

"I look at different cases to create theories and more general principles. I study classical naval thinkers and analyse their relevance today and how they have influenced military thinking."

Many argue that the golden age of naval power theory stretches from the 1890s to the First World War, with leading thinkers such as the American Alfred Thayer Mahan and the Briton Julian Corbett.

"Among other things, I have written a book on naval thinking during this period and in particular Julian Corbett's military and naval theories. That's something of my specialty", says Jerker Widén.

"I also study the drivers of naval cooperation and how naval combat forces are used to send political signals in different ways. After all, when naval forces are out at sea, they are symbols of state sovereignty and power."

He is also interested in the research field of military doctrine.

"Doctrines are used to try to guide an organisation to think and act in a similar way. They serve as a tool for shaping an efficient and agile organisation and have historically been used to transform defence forces. For example, if you have failed in war and want to think differently, an organization may formulate ideas about the role of the armed forces and how the armed forces should be used in a doctrine."

In the area of naval doctrines, Jerker Widén studies what leads to success in naval warfare and naval combat and how states can defend themselves effectively against coastal invasions.

Where does your interest in military theory come from?

"I have a background as a political scientist and historian and have always been fascinated by war and warfare. When I was younger, I read a lot about the Second World War and gave lessons on the topic in secondary school. War is horrific, but it is also a tremendous human drama that is interesting, even when we see its destructive forces."

Jerker Widén has worked at the Swedish Defence University for 17 years and became a professor in 2017. One of his first assignments as a new employee was to write a textbook on military theory.

"At the time, I didn't know much about the subject, but together with my colleague Jan Ångström, we wrote the book in nine months, and it has become perhaps the most widely read textbook at the Swedish Defence University. The book was originally written in Swedish, but since 2015 it has been available in English and soon in Japanese as well."

Research in military theory is conducted primarily through various forms of text analysis.

"I evaluate, analyse and interpret written sources. This can be material from military organisations or historical cases that we use to test and generate theories."

The focus is on ideas and concepts and how theories can create a deeper understanding of different phenomena. The challenges in the field include the fact that the scientific study of war and warfare has long been a rather neglected area.

"The fact that the leading thinkers in the field were active for over 100 years is telling. It was only after the Second World War that scientifically skilled people began to study war and warfare in a more systematic way, which means that the field is a little behind compared to other sciences."

What can a scientific approach add to the understanding of the field?

"It provides a broader view of the phenomenon. When you are part of an activity, you are often trapped in your own context and it is difficult to see things from the outside. A researcher can step out of this and look at a wider set of empirical data. Critical thinking is also inherent in the scientific approach, which is important in an authoritarian and hierarchical organisation like the military."

What are you working on going forward?

"I'm very inspired by our Vice-Chancellor’s vision for us to be a world-leading university, providing the best officer training in the world, so I spend a lot of time pushing different processes to get us there. It's a long-term project, and even if we do everything right today, it could take ten years to reach that goal, and if we make a lot of mistakes, it could take a generation. But at the same time, I realize that I am only a small part of this work. It's about creating the conditions for those who come after us so they can be more skilled than we are today and thereby achieve excellence. I see myself more as a useful team player than as a top scorer who has to score all the goals."

Currently working on: Textbook on military working methods, and articles on combat and the military doctrine dilemma.

My motivation as a researcher: To become more knowledgeable and wiser. The world, and the people in it, is fascinating.