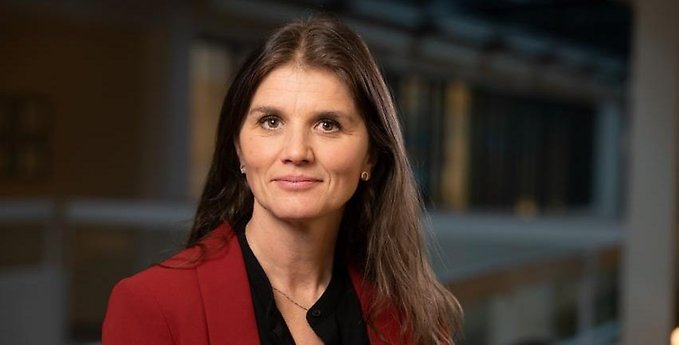 As a researcher in the field of Leadership Studies, Jenny Madestam is particularly concerned with leadership as exercised in public life and politics. This was certainly a highly relevant topic during the turbulent political period last autumn, in 2021, which saw both the change in party leadership of the Social Democrats and the Prime Minister’s reelection in the Swedish parliament. Jenny Madestam is therefore frequently called upon to make media appearances as a political commentator, and she is passionate about disseminating knowledge and research communication.

"I applied to the Swedish Defence University as, before this, I’d never worked at a research institution that focused solely on leadership. I’m also very excited about the prospect of being involved in the building of a research environment in this subject", says Jenny Madestam, who is currently Associate Professor of Political Science and Senior Lecturer in Leadership Studies at the Defence University.

Before taking up her post at the Swedish Defence University last spring, Madestam had worked as a researcher and Associate Professor at the Department of Public Administration, Södertörn University, since 2015.

"I have a background in Political Science, and I usually describe myself as born and raised in the Department of Political Science at Stockholm University, where I received my PhD in 2009 with a dissertation on the party leader ideal in the Social Democratic and Liberal Parties."

Interest in people and relationships

Where does your interest in political leadership come from?

"Well, I’ve always been interested in people and relationships, so I could probably just as well have become a psychologist. And then I’m also fascinated by politics, so my research has been directed towards people in politics and the public sector."

Madestam’s commitment to her field also derives from her upbringing and home environment, where politics was a frequent topic of conversation at the kitchen table.

"My mother was a social worker and dedicated her whole life to the field, and it’s probably this influence that gave rise to my interest in people. Both my parents are also politically interested and were also, to some extent, politically active while I was growing up."

With her expertise in political leadership and public administration, she hopes to contribute new perspectives on the nature and role of leadership and its significance.

"Knowing how things work in the public sector and politics is essential, not least for understanding the Armed Forces, which is also a politically controlled organization. This is why it’s important to develop our knowledge of the political arena and public administration, and it’s here, among other areas, where I can be involved and make a contribution."

The Swedish Defence University's affiliations with professional practice and its interdisciplinary environment were also factors that appealed to Jenny Madestam. Previous teaching experience on police education courses at Södertörn University, led to her developing an awareness and interest in the Defence University.

"For research to be relevant, it needs to be linked to “real-life” professional practices and contexts. And then to be able to consolidate results and findings with the academy – that’s when research is at its best."

Indeed, the idea for one of Madestam’s current research projects came about in just this way, in connection with teaching on police education courses. She is investigating whether and, if so, how, the attitudes of student police officers to diversity change during the course of their education.

"This research concerns both the educational effects on the students and how students are affected by peer students."

This is a long-term study funded by the Swedish Research Council, for which some data is still to be collected before evaluating the results.

Another ongoing project that enters its final phase this autumn is a mainstream disciplinary book publication about women who are or have been party leaders in Sweden.

"Writing this book has been a dream project for me ever since my doctoral studies. I’ve seen that there are differences in how men and women in politics experience their roles and responsibilities, but also in how they are treated and portrayed. I have wanted to shed light on the women's own stories about this, and the result is this book that will be published this spring."

The book is interview-based and encompasses all the female party leaders, past and present, in Sweden.

"Karin Söder is the only party leader who is no longer living, but I was able to interview her back in 2001 for my dissertation project. And I’ve just managed to secure an interview with Magdalena Andersson, so I'll squeeze her in at the end."

When asked what drives her as a researcher, Madestam emphasises her commitment to disseminating knowledge and research communication.

"Part of this is that I’m extremely inquisitive by nature, although this is probably the case with all researchers because the work is about asking questions. But I’m also passionate about being able to share research findings and insights with the public. Some believe that this is not something academics should do, but, for me, this conveying of knowledge and learning to society at large is very important."

Jenny Madestam is often seen as an expert political commentator in the media and often agrees to discuss her research in various contexts outside the academy. This autumn has therefore been particularly hectic given the political situation.

"I don’t want the visibility of my research to be limited to a niche journal that few people care about, but rather that the findings be conveyed to the public. Of course, it’s important for us to inform others about what we do, but in some way, we’re also obliged to do it as it is tax money that finances our operations. At the risk of sounding slightly pretentious, but in my view, the role of educating the public is a crucial one for us as academics."

At the Swedish Defence University since: April 2021.

Current projects: “Women in Power”, a book about current and former female party leaders that will be published in the spring of 2022. I also do a regular podcast together with Marja Lemne, senior lecturer at Södertörn University, where we address issues in politics and public administration, especially focusing on Sweden.

In my free time: I'm with my family and in the stables, with our horse.

Hidden talent: I’m good a proficient skier and ski instructor at a ski slope in Södertälje.

My ethos and driving force as a researcher: curiosity and contributing to public education.