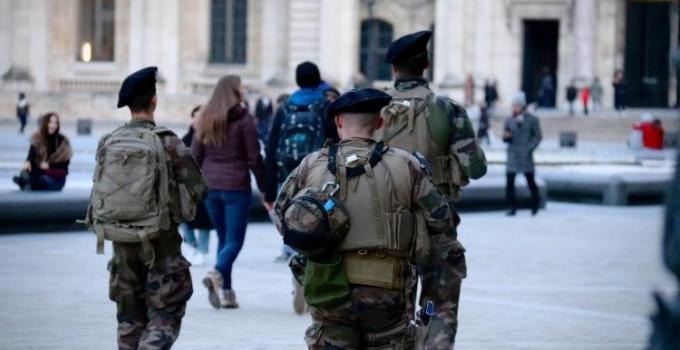 An increased terrorist threat may lead to an increase in the military’s political influence, according to Chiara Ruffa, Associate Professor and Senior Lecturer at the Swedish Defence University.

From terrorism to saving lives in the Mediterranean. Associate Professor Chiara Ruffa’s research can be described as broad, but a common theme throughout is civil control of the military. The findings in her research have shown for example, that terrorism can lead to increased political influence for the military.

"When President Macron travels around the World he is always accompanied by a general so that he can quickly sign decisions related to terrorist threats that affect the security situation", says Chiara Ruffa.The example may seem a little trivial, but it demonstrates that there is an interdependence between the president and the military in France, says Chiara Ruffa, who along with, fellow researchers, Vincenzo Bove and Mauricio Rivera has concluded that an increase in the number of terrorist attacks, or an increased terrorist threat, can give the military greater political influence. "Politicians allow this because they have a desperate need to demonstrate strong statesmanship", says Chiara Ruffa.

Researchers have approached this issue by looking at factors such as the size of the military and the proportion of government spending allocated to it in the countries of the world. In addition, the military’s participation in executive and legislative bodies has also been studied.

"We can see that there is a strong correlation between increases in these areas and the occurrence of a terrorist attack or an increased terror threat."

Chiara Ruffa in the field.

‘The country at war’

Ruffa and her colleagues have also taken a closer look at two different countries, France and Algeria. Interviews were conducted with generals and senior officials in the department of defence and close to the president about the terrorist attacks in Paris 2015 and Nice 2016.

According to Chiara Ruffa, there are many indicators that the military gained greater influence under the then president of France, Francois Hollande, as he attempted to save his own political position by demonstrating resolute action and declaring that the country was at war. 1300 soldiers were stationed on the streets in France, and the military were given greater tactical autonomy. It also seems that the military’s access to the president increased – after the attack there were meetings every seventh day, compared to every forty-first, in the period before.

She makes an interesting observation about a more central role in politics for the military:

"It was not what the military wanted, they were very resistant. It was President Hollande who did it for political reasons."

And there are other details from France.

"Even before Macron was elected, when the election went to a second round, he was given information about the seriousness of the threat situation", says Chiara Ruffa.

Other countries who have discussed using the military to combat terrorism include Italy, Spain and Germany. Following the terrorist attack in Manchester, the UK stationed tanks at Heathrow airport, which is another example of this.

"I am not suggesting the domestic use of the military is necessarily a bad thing, but you have to be aware of any potential negative consequences", says Chiara Ruffa.

What does greater military influence mean for society?

"Generally, from a short term perspective, having a military presence on the streets is reassuring for the general public. This certainly worked in France, the public felt safer, but this was short term", she says.

In the long term greater military influence in politics is more problematic in her view.

"It can undermine the quality of democracy and it can also complicate how the military is governed and controlled. There are some very worrying potential consequences."

Sweden after the attack on Drottninggatan in Stockholm

The key to reducing these risks, while at the same time combatting terrorism, is according to Ruffa, to work with cross-border, transparent legislation and not to compromise on the quality of democracy. In her view, emergency legislation should be used with great care and must be possible to repeal quickly.

"Posting the army on the streets might temporarily calm people, but it won’t necessarily lead to the disappearance of the threat itself."

What has it been like in Sweden since the attacks on Drottninggatan?

"There hasn’t been any major discussion about domestic use of the military, the role of the police has been strengthened instead, and they may even have been given more power and greater autonomy", she says.

Is there a difference if civil agencies are given greater influence compared to the military when it comes to the problem of countering terrorism?

"In a democracy civil counter-terrorism agencies usually have the dominant role. Civil agencies typically work with more transparent processes and in most countries there are fewer grey areas around them", says Chiara Ruffa.

According to Chiara Ruffa the domestic use of the military should be studied closely.

"We need to study democracies and autocracies simultaneously more often. There are interesting similarities that can be found in both. The last thing I was expecting was to find was similarities between France and Algeria", she says.

These similarities mainly related to how the processes were similar when the military was given more influence in both France and Algeria. The consequences were, however, different, for example, the Algerian military became more involved in day-to-day decision-making.

Saving lives in the Mediterranean

In addition to her research, Chiara Ruffa and two of her fellow researchers have just submitted a book for publication. It is about how diversity including, language, religion and nationality influence the effectiveness of peace support operations.

"We found that diversity in force composition on operations is a good tool and often increases effectiveness", says Chiara Ruffa.

"We are also in the process of conducting research into why women leave the armed forces to a greater extent than men."

Another project she is working on is about search and rescue at sea, not least in the Mediterranean during the migrant crises.

"Trying to rescue people at sea has long been considered an obvious norm and duty. I am looking at how that norm is now being questioned", says Chiara Ruffa.