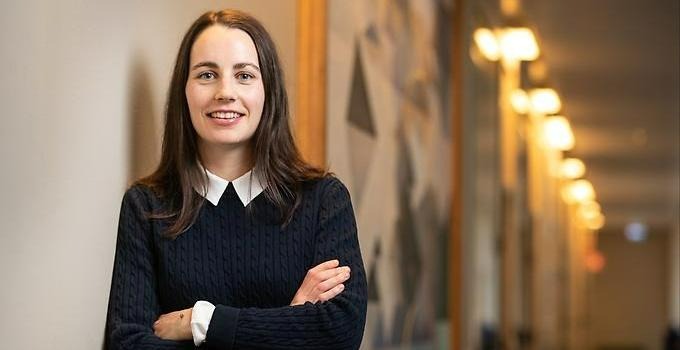 Hanna Deiaco is passionate about the Swedish total defence concept. Both in theory and in practice. In her doctoral thesis, she digs into the question of what the total defence really is - beyond the official rhetoric.
"The field can be likened to a football pitch. The rules are shared. Some want to change the rules, others want to keep them", she says.

Hanna Deiaco came to the Swedish Defence University (SEDU) seven years ago for a bachelor's programme in political science with a focus on security policy and crisis management.

She is currently working on her Ph.D.

Her interest in security policy and defence really started in 2014 when resuming the concept of Swedish total defence planning was an important issue on the political agenda.

On 10 December 2015, the Swedish government decided that the Swedish Armed Forces, the Swedish Civil Contingencies Agency (MSB) and other relevant civilian authorities would resume their joint planning for total defence in the light of the recent security policy developments in Sweden's immediate region.

"The only 'experience' I had of war came from stories about the Second World War told by my 90-year-old Finnish-Swedish grandfather", she says and continues:

"My grandfather laughs every time I tell him about my research on the structure of total defence, that I'm in the Home Guard or that I watch the TV programme Secrets of the Elite Soldiers. It's difficult for him to understand where those genes came from, because he did everything he could to avoid basic military training."

Combining theoretical knowledge with practical skills is important to Hanna Deiaco. As part of her engagement in the Home Guard, she is planning to do basic soldier training for volunteers, followed by paramedic training.

"It is not necessarily the military aspect in itself that appeals to me, but rather acquiring useful skills for practical crisis management. For me, theory and practice go hand in hand. In practice, I pick up things that make me want to re-examine the empirical research, and in theory, I learn things that I want to put into practice."

Hanna Deiaco is currently working on her Ph.D. in Swedish Total Defence Planning. This is a field where not much research has been done, and where many of the practices are informal among the civilian and military actors that make up total defence.

"In my research, I talk about a total defence research field, and how power relations within the field set the structure of how the actors engage with each other and how things are put into practice by the professionals. The field can be compared to a football field. The rules of the game are shared. Some want to change the rules, others want to keep them. In the struggle that ensues, the players use different assets to shape the rules to fit their own interests. The outcome depends on which assets are valued the most", she says.

It is not time, yet, to discuss the insights from her research. But she is aware, and hopes, that the thesis could become a ‘hot topic’ in the security policy debate.

"I am prepared for resistance. Internally, I am met with support. My contribution is to go beyond the official rhetoric and clarify the relations between the actors in what I consider to be the total defence field. Is total defence as total as it is officially said to be?"

Contribute to crisis management through research

The pandemic has put a spanner in the works, but now she hopes to perform some field observations during total defence exercises once the restrictions are lifted.

As a PhD student, part of the position also involves teaching.

"That's the part I thought I wouldn't like, but it's turned out the other way around. It has given me inspiration and is probably the part that has been the most rewarding."

In the future, Hanna Deiaco hopes that her research and experience in practical crisis management will be a contribution to Sweden's crisis response.

"There are many crises that are palpable. Pandemics, refugee crises, crises caused by climate change. Crises that can be collectively referred to as civilian crises."