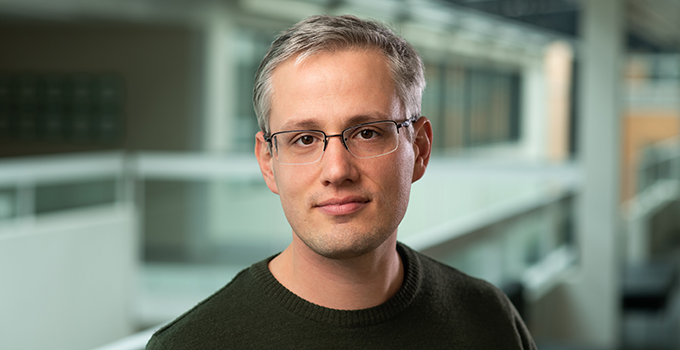 Henrique Garbino, doctoral student in War Studies with a background in the Brazilian Armed Forces.

Henrique Garbino’s research focuses on the use of landmines and other explosive devices by non-state armed groups. With a background in the Brazilian Armed Forces and several international assignments behind him, most recently in Ukraine with the International Committee of the Red Cross, his aim is to help bridge the gap between theory and practice.
“The Swedish Defence University is an ideal place to work on these issues, where I can also benefit from my previous experiences”, he says.

Henrique Garbino has just returned to Stockholm and his position as a doctoral student in War Studies at the Swedish Defence University, after spending six weeks in Ukraine as part of the International Committee of the Red Cross’s (ICRC) rapid response mission in the country.

“I worked as an Explosive Ordnance Disposal Specialist within ICRC’s Weapon Contamination Unit, which deals with contamination from landmines and explosive remnants of war, as well as chemical, biological, radiological, and nuclear hazards”, he says.

Reducing the impact of weapon contamination

The unit is responsible for activities to reduce the impact of weapon contamination on affected populations. The actual work includes desk and field assessments on weapon use, risk education, capacity building, and if necessary, clearance. Henrique Garbino’s team was the first to move back into eastern Ukraine after the outbreak of the war on February 24 to assess the situation ahead of ICRC’s continued work.

“Our main tasks were to assess the risk for our staff, our operations, and the civilian population, and come up with risk mitigation strategies. We also collected information about what types of weapons were used in the area, what the needs for demining looked like and possible support for demining activities, and what the impact on civilians was. For example, we would map potential hazards, such as chemical factories that, if bombed, would release toxic chemicals; and then plan for what to do and how to evacuate the area if that happened.” 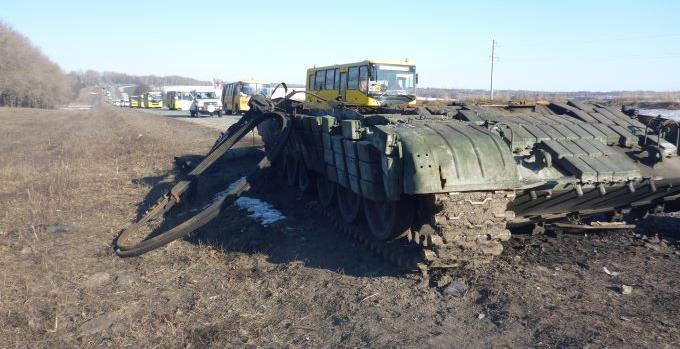 The Weapon Contamination Unit assesses a destroyed main battle tank for unexploded ordnance in support of the safe passage of civilians from Sumy in March 2022. Photo: Henrique Garbino/courtesy of the International Committee of the Red Cross

He was based in Poltava but worked both in Kharkiv and Sumy, near Russia’s eastern border.

“The logistics were very complicated, and it took us some time to get to eastern Ukraine from the Romanian border where we arrived. We had a lot of equipment with us, such as mine detectors and personal protective equipment, and there were many checkpoints and busy roads. Our movements in the area were also restricted due to the need for security guarantees. In line with ICRC's work, we had to inform both sides of the conflict about our movements in advance, as we were working in conflict-affected areas.”

A lot of the work consisted of assessments, planning and staff security, for example, guaranteeing that the roads were as safe as possible to ensure the safe passage of civilians stranded by the conflict. They also worked together with the Ukrainian Red Cross and civil defence on spreading safety messages and increasing the domestic capacity to handle, for example, landmines and explosive remnants of war. As fighting has been going on in the Donbas region of eastern Ukraine since 2014, the country has built up a relatively good capacity in the area. Still, new weapon contamination has put pressure on the system.

“Much of the clearance work is done by the civil defence, and it is also here that we see casualties. Even in areas no longer affected by the hostilities, there is a high risk to civilians due to abandoned and unexploded ordnance and landmines. However, people often want to return to their homes quickly when fighting and shelling move away from their cities and do not always wait for the go-ahead from the authorities. So those who work with clearance on-site are taking many risks and are under great pressure. Here we can hopefully make a difference by exchanging experiences regarding safety procedures and best practices.”

Henrique Garbino has served in the Brazilian Army as a combat engineer officer from 2006 to 2017. His experience in the military covered a range of different activities, such as explosive ordnance disposal, civil-military coordination, counter-trafficking, and UN peacekeeping operations.

“But I never really wanted to pursue a life-long military career. I was more interested in working with peacekeeping efforts internationally. To be able to do that, I realised that I needed a master’s degree, so I took a leave of absence and received a scholarship for a master’s program at the Department of Peace and Conflict Research at Uppsala University.”

During the master’s program, he did internships in Tajikistan, Ukraine, the Netherlands and Colombia, and worked with humanitarian demining, civil-military cooperation, and disarmament, demobilisation, and reintegration of former combatants (DDR).

Before starting his doctoral studies in War Studies in the spring of 2021, he had worked for the ICRC in eastern Ukraine, which had an ongoing mission there due to the war in Donbas.

“One of the reasons why I went back to Ukraine in March 2022 was my commitment to the team. I wasn’t comfortable going there, and the situation was chaotic when I arrived, but being able to contribute to the team was a strong motivation. Hopefully, my previous experience in the country had some added value. As a researcher, it also feels important to keep a foot in the practical world.”

Research on landmines and other explosive devices

His doctoral research focuses on the use of landmines and other explosive devices by non-state armed groups.

“It’s an area that interests me and where I can benefit from my previous experiences, and the Swedish Defence University is an ideal place to research these issues.”

His research aims to contribute with new knowledge about what motivates non-governmental armed groups to comply with international law and be more restrained in armed conflicts.

“If we become better at understanding what motivates these groups, we can tailor strategies for how we should approach and interact with them.”

At the Swedish Defence University since: January 2021

Current projects: I have an upcoming article in the Journal of Conventional Weapons Destruction that deals with the potential synergies and challenges regarding the integration of humanitarian mine action and disarmament, demobilisation, and reintegration processes. It’s a policy article co-authored with Laurie Druelle (Humanity & Inclusion) and Eric Mellado Åhlin (EEAS/FBA), that should be published in May.

When I have time off: I try to spend time in nature and have a beer with friends.

I like to discuss: music, animal life, and funny stories.

My driving force as a researcher: A lot of the work we do as practitioners is unstructured and atheoretical, and much of the research we do is disconnected from reality on the ground. I want to help change that.