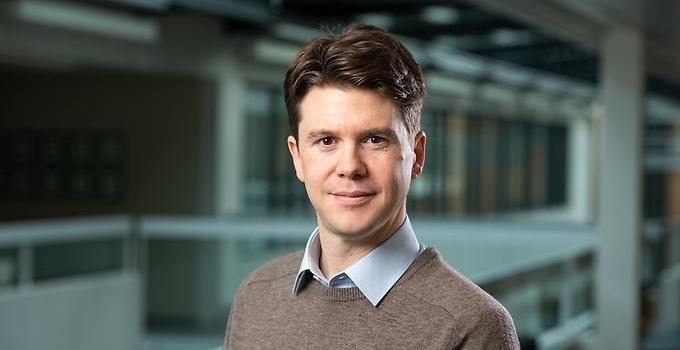 Antoine Bousquet is an Associate Professor and Senior Lecturer in Political Science at the Swedish Defence University.

Antoine Bousquet is a researcher that likes to look at broad historical processes and draw connections from different fields. He has recently published a second edition of his first book The Scientific Way of Warfare and is now working on a project that explores the impact of nuclear war on strategic and philosophical thought.

Antoine Bousquet took up his position as an Associate Professor at the Swedish Defence University last June, after 14 years at the University of London.

“I wanted to experience something different, and the Swedish Defence University was on my radar for a couple of reasons. One is that I knew several people here whose work I was very interested in. I also think it’s a unique institution. It comes from a tradition of being a conventional war college and has now become a real university that is open to broad thinking about war and in which I can find a home. It combines a rigorous engagement in military and strategic issues with a willingness to ask big questions about them.”

He describes his own research as being very explorative initially, with the aim to bridge war studies and strategic thinking with broader philosophical and theoretical questions.

“I am trained as a political scientist in international relations, but I don’t feel narrowly defined by that. When I start a project, I like to read as broadly as possible and immerse myself in the material before I start to draw connections from different fields.”

His work with the book The Scientific Way of Warfare: Order and Chaos on the Battlefields of Modernity, that is based on his PhD thesis and is just out in a second edition, is an example of this broad approach that involved gaining an understanding of the history of science across several centuries.

“I was interested in the ways in which scientific thinking and ideas found themselves reflected in the theories and practices of war”, he says.

How military perception developed over time

His second book – The Eye of War: Military Perception from the Telescope to the Drone – also demanded a deep dive into the history of technology. This time the focus was on technologies of sensing, imaging and mapping, providing an account of how military perception has developed over time. The starting point for the investigation was the realization that we appear to live in a world today where almost anything that can be perceived on the planet can be targeted.

“We live in an age of global targeting, and the drone is a good example of that. The question I ask is how did we get here, and what does that imply for war in the 21st century?”

Perception begins with the activity of sensing and the ability to gather information on the operational environment, with the technologies of telescope, radar, and infrared allowing for ever-greater reach and precision. Then there is the activity of imaging, which is the capability of representing that information for analysis and distribution.

“Here I look at the development of aerial photography, satellite imaging, computer vision, and virtual environments. Then we have the activity of mapping – the correlation of perception to geospatial frameworks – which covers cartography, GPS, and geographic information systems. All three activities of sensing, imaging and mapping are critical to the logistics of military perception.”

Finally, he looks at counter-practices to these activities, such as hiding, camouflage, and decoying.

“If it becomes possible to target anything you see, then combatants increasingly must conceal themselves.”

The book concludes that the more central the role of perception becomes in war, the more radical the forms of concealment by the enemy become.

“The ultimate form of concealment is to not appear like an army anymore, to dissolve into the background and to infiltrate the enemy society. I suggest that this kind of disappearance of war, away from very clearly defined conflicts with a beginning and an end within a certain territory, is something we will see more of.”

Currently, he is working on a book project about nuclear warfare and nuclear thought together with a colleague based in Hawaii. A part of the work consists of going back to the Cold War and the initial formation of nuclear strategies.

“I am looking at how nuclear weapons initiated a crisis in strategic and philosophical thinking that hasn’t really been resolved, asking what it means for us to live in a world where we can obliterate ourselves in the space of a few hours, and how we should organize and secure our existences in the face of that reality. It’s another ambitious project that asks some big questions that have unfortunately taken on a new urgency in the past few months.”

He is currently in the middle of the project and hopes that the book will be completed next year.

How did you become interested in a research career initially?

“I think it was probably due to a singular encounter. When I was a student at the London School of Economics, I took a course that was taught by Professor Christopher Coker, who later became my supervisor during my PhD project. He taught strategic studies in a wide-ranging, philosophically minded fashion in which there were no boundaries in terms of the ideas or cultural references that could be brought to bear. Anything could be material for understanding the world that we live in and the unique place war has within it. After that experience, I became durably fascinated in what war says about us and where we might be going, and I think I was hooked from then on.”

What are the challenges within your area of research?

“When I set out on a new project, I don’t know how long it’s going to take, and have to spend a lot of time assimilating new materials and new knowledge to get to the point where I feel that I can say something about it. So, the challenge is never knowing where you’re going to end up, but that is also the most exciting thing about it. And I feel that’s true of most research. If we knew all along where we were going to be at the end, we probably wouldn’t have the motivation to do it at all.”

At the Swedish Defence University since: June 2021.

Current with: The new edition of my book The Scientific Way of Warfare: Order and Chaos on the Battlefields of Modernity with a launch event the 9 June. Read more about the book and the event.

When I have time off: I enjoy spending time with my young family. We are still delighting in discovering everything Stockholm has to offer, from its urban attractions to its beautiful natural surroundings.

My driving force as a researcher: My curiosity.