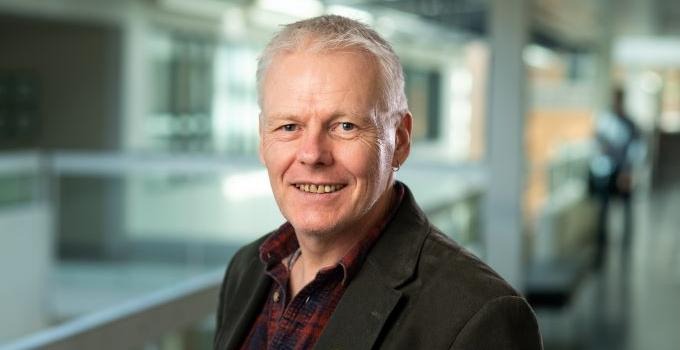 With a strong anchoring in the empirical tradition, Professor Steve Murdoch hopes to contribute with new knowledge, both about the military-diplomatic relations between Scotland and the Nordic countries during the 15th–17th centuries, but also in terms of method and how to read historical documents and work in archives.
“Going back to the original source is incredibly important in historical research”, he says.

Since 1 April 2022, Steve Murdoch is Professor of Military History at the Swedish Defence University. He comes most recently from the University of St Andrews in Scotland, where he has been a professor of history since 2010. His research primarily revolves around military-diplomatic relations between Scotland and Scandinavia during the 15th–17th century.

“My research is not about big men and big battles, it’s about how they got there and the impact it had on society”, he explains.

He talks about how he got his interest in history from home, where he was largely raised by his grandmother who herself was in uniform in the First World War, where she also lost a brother.

“She taught me to understand war, not to glorify it”, he says.

Focus on the 15th–17th centuries

One of his ongoing research projects is about soldiers' widows and how they fought for their rights.

“How, for example, did a widow from Scotland in the 16th century manage to get compensation on behalf of her husband, when he died in connection with battles in Germany under the flag of the Swedish army? To find out more about what agency women had, I am for example looking into international jurisdictions and searching the archives for traces of correspondence between the countries.”

Another ongoing project is based on the correspondence between two Scottish ambassadors based in Sweden and Denmark during the period 1618-1634, James Spens and Robert Anstruther.

“Through their exchange of letters, we get a picture of what diplomatic relations looked like during this time, and we also get their personal comments on the events.”

Diving into the archives

Steve Murdoch's research is largely based on archival work, which is one of the reasons why he decided to move to Sweden.

“The archival sources concerning my historical interest in Scandinavia can be found here in more abundance than in the UK. I have spent a lot of time at the National Archives and the War Archives, but also at smaller repositories such as the City Archives in Gothenburg and Stockholm.”

Another reason why he decided to move to Sweden is of both a political and a more personal nature.

“I was absolutely appalled when Brexit became a fact. I have always felt part of the European family and often traveled between Sweden and Scotland because of my research, but also because all of my wife's family live here, including her mother who has now turned 90. So, when my travels here would be limited due to Schengen, we decided to move here permanently.”

Research with an empirical approach

Steve Murdoch emphasizes the importance of empirical research and believes that it is especially within this field that he has something to contribute with at the Swedish Defence University.

“I’m less theoretical than a lot of Swedish scholars. Right now, the historical period I'm interested in is not a priority here at master’s level, but I’ll hopefully be introducing that during the coming years and making it formally part of the course.

"I also think I have a lot to contribute in terms of method, skills training and how to read historical documents and work in archives. It is a huge difference to read a document in its original form. You often find information there that you can't see in the printed version or in a digitized format, or even spot transcription errors. Going back to the original source is incredibly important in historical research, as I hope to demonstrate to the masters students this year."

To facilitate and systematize archival-based research, Steve Murdoch, together with his wife and academic partner, Alexia Grosjean, has built a database based on documents from the archives. There are names of over 8,000 migrants who came from the British Isles to Northern Europe collected in the Scotland, Scandinavia and Northern European Biographical Database (SSNE).

“We have gone through the muster rolls from the Swedish army and continue to expand the database with more information about the soldiers. We now begin to see where the women fit in and can piece the puzzle together to learn more about this time, both through the activities of the soldiers and their extended families.”

It is obvious that Steve Murdoch is passionate about his research, but how come he chose the academic path in the first place?

“It was never the intention that I should pursue an academic career. I actually left school when I was 16, without having my school qualifications. But after working various jobs for about ten years, I met my future wife on a road trip to Ireland, and it was she who later persuaded me to go back to school.”

After getting his degree he took up studies in history and the Gaelic language at the university, and it was not until his final semester, when he took a course on the 30 Years War, that he started to think about doing a PhD in military history.

“I was very inspired by our teacher, professor Paul Dukes. I also became fascinated by the war, the role that the Scottish soldiers had in it and the lack of knowledge about it, so it became the subject of my doctoral thesis. And 28 years later I still remain on that same path."

I also just completed and sent out for peer review, an article co written with Karin Tetteris, a PhD student at Stockholm University: The Commemoration of a Siege of the Thirty Years’ War: The Stralsund Medal of 1628 to Militärhistorisk tidskrift.

I have also just released the Militärhistoriska avdelningen's research seminar for 2022-2023 at the Swedish Defence University and have co-ordinated the formation of an international Military History Research Network for scholars whose focus is on the Baltic and North Sea area.
When I have time off: I go for long runs in the countryside or walks in the mountains.
Last read book: Hermann Hesse's Siddhartha (again!).
Hidden talent: I am quite artistic.
I like to discuss: Environmentalism and nature conservation.
My driving force as a researcher: To motivate students to become deeper and more critical thinkers, and apply that talent.