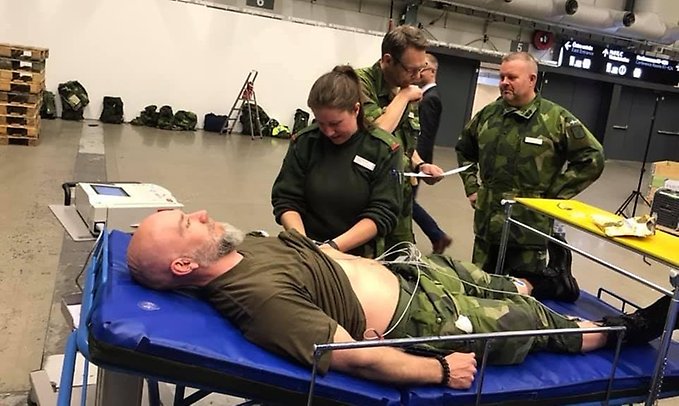 Research into collaboration on the corona crisis

When Associate Professor Erik Hedlund was awarded research funding to study collaboration within the framework of total defence, the plan was that he and research assistant Camilla Lönngren would be observing collaborative exercises for the Swedish Armed Forces and civilian government agencies. However, then came the corona crisis. The exercises were cancelled and replaced with live operations in the construction of a field hospital in Älvsjö that was completed in record time. It would soon prove to be a far far more constructive study object study object.

In just a few weeks, Region Stockholm, the property company Locum and the Swedish Armed Forces, through the Middle Military Region and the Swedish Armed Forces Centre for Defence Medicine, have to complete constructing a hospital that will in due course be able to admit as many patients as Karolinska University Hospital. For those responsible, it is a challenge in terms of collaboration and planning with few parallels. A research project aimed at identifying how collaboration between actors involved in total defence can be improved, makes it is difficult to imagine a better opportunity to gather base data.

“I felt straight away that I couldn’t sit and wait for this to pass by, given the purpose of our research project. This is a live operation, it was a case of trying to get into it as quickly as possible,” explains Erik Hedlund, Associate Professor in the Division of Leadership at the Swedish Defence University. 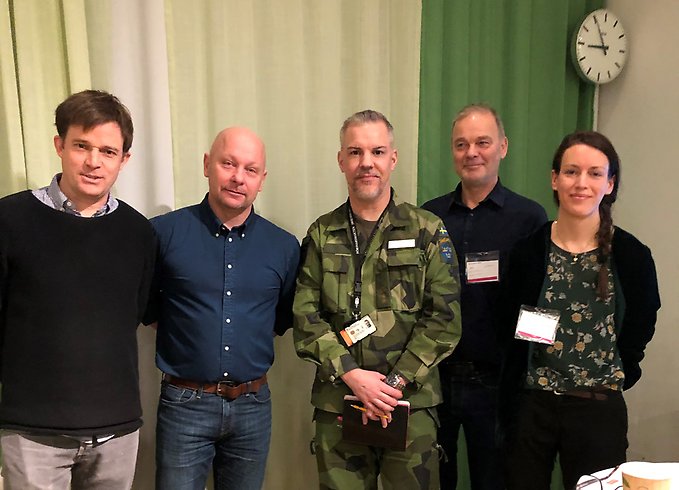 Having made contact with Lars Rask in the Middle Military Region, the researchers were given the opportunity to study collaboration between the different actors on site by observing their staff meetings. The difference between exercises and live operations is clear, believes Erik Hedlund:

“It is precisely the fact that it is live that makes the big difference. Something really has to happen now. There’s a task that needs to be performed, there’s no choice. In exercises and training you can either learn something or not, a lot or a little. Here everyone has to deliver, because it has to be completed.”

Focus on observation and making contacts

The researchers’ focus during the construction is on observing and making contacts ahead of a larger data acquisition phase via interviews and surveys, once the hospital has been completed For Erik Hedlund, who has extensive experience of studying military staff work exercises, claims the observation element is key to the study.

“It provides knowledge in context that’s extremely important. Now that I’ve been here, I’ve been able to see that there have been some problems regarding the way people work with staff work and planning; which can to some extent disrupt collaboration. If I hadn’t been here, I wouldn’t have known what to ask later.”

The research project will continue until 2021. But even now, Erik Hedlund has already made several observations that may eventually result in important lessons being learned from the corona crisis. One example is the importance of all actors working on the basis of a common planning model for staff work, which is well established within the armed forces but not as obvious among civilian actors.

“Not everyone is used to staff work and staff planning models. However, when you have to do things for real, it’s important to have a model that works. Which one you choose is not crucial, as long as you have some kind of common model. This provides structure and security. Procedures are extremely important in these contexts when everything is up in the air.”

One consideration that may also provide important food for thought in the development of total defence is how quickly it can be possible to do something when it is really required. Erik Hedlund quotes one logistics manager who told him that the hospital’s gas installation would normally require a decision-making process of up to six months. In Älvsjö it was completed in four days.

“It shows that things can be made easier and that many aspects are surrounded by an administrative apparatus that is far too cumbersome. I hope that this will be one lesson identified from the corona crisis, that sometimes more efficient ways have to be found.”

At this point, it is uncertain how the corona crisis will develop and how much pressure there will be on the new field hospital. However, when it is ready to receive its first patients, it will be possible to look back on a totally unique collaborative effort. Erik Hedlund believes that leadership has been absolutely crucial, and highlights in particular the officers involved:

“Not many people here have experience of anything like this, so they had to learn as they went along. So it’s really good to have experienced people in charge who can lead the work of the staffs. In this respect, the civilian chief of staff Anders Gidrup from Locum, with his background as an officer, and the Military Region’s Director of Operations, Lars Rask have shown that military leadership is of very high class. Procedure, knowledge and experienced leadership are extremely valuable in these kinds of actions.”