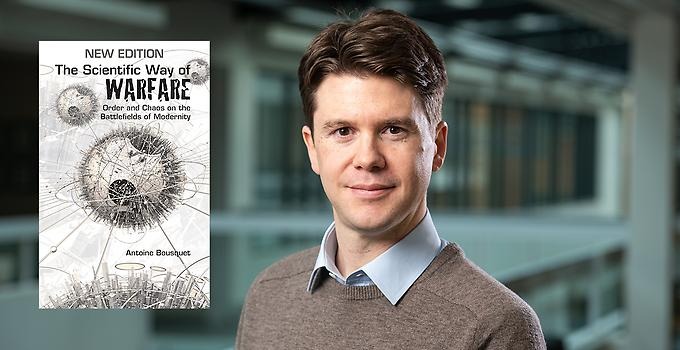 The second edition of Antoine Bousquet’s book The Scientific Way of Warfare: Order and Chaos on the Battlefields of Modernity has recently hit the shelves and will be presented at a book launch at the Swedish Defence University on 9 June.
“The book is an attempt to tell the history of modern warfare in relation to the history of science and technology”, he says.

In the book, Antoine Bousquet looks closer at four periods in history, from the 17th century up until today, in which certain scientific ideas become dominant within military thinking.

“I was interested in the ways in which scientific thinking and ideas found themselves reflected in the contemporaneous theories and practices of war”, he says.

In the beginning of the scientific revolution in the 17th and 18th century, the ideas of mechanism are dominant in society.

“At the time, we see the world organised according to the movement of mass and theories of gravity, and the associated technology to these ideas is the clockwork mechanism.”

During the 18th century, clockwork was considered the most sophisticated technology of the era and a pervasive model for understanding and organizing reality.

“The solar system and natural bodies are conceived as elaborate clockwork systems. It becomes an aspiration for society, above all through the enlightened absolutist state. And the military correspondent for mechanism is the clockwork army, where everything is drilled and rehearsed in advance.”

Under mechanistic warfare, the soldiers perform on the battlefield what the commander in chief has decided. These armies are very precise and resistant to disorder, but they have no autonomy or independence, they just follow their predetermined program.

The motorization of the army

The book then moves on into the 19th century and the science of energy and thermodynamics that is tied in with industrialism, the development of the motor and the increasing importance of energy in the cultural imaginary.

“Here it is the engine that becomes the dominant technology and powers the industrial revolution. But it also becomes in turn a model for society. We start thinking about the world and the universe as being composed of energetic processes, that the universe is not a clockwork that will run forever but in fact obeys a thermodynamic process that will eventually run down”, he explains.

In the military context, this translates to armies which make increasing use of energy in both the development of rifles and artillery, all the way up to nuclear weaponry, and the motorization of armed forces.

“This leads to an escalation in destructiveness of war associated with the intensification of the industrial basis of conflict and the mobilization of mass armies.”

The Second World War then acts as a hinge between the second period – thermodynamic warfare – and the one that comes after, which is cybernetic warfare. Now the dominant scientific concept is no longer energy or mass, but information.

“This is associated with the development of the computer and with the science of cybernetics and information theory, such that we come to see the world as being primarily composed of informational processes.”

Cybernetics is particularly interested in the regulation of systems through information feedback. Compared with the clockwork system, that was unable to change its behavior autonomously, a cybernetic system can continuously adapt to what is going on and act independently in the pursuit of its assigned goals.

“It also means that humans and machines become much more closely integrated, because humans also become understood as information-processing systems. We become used to thinking of the human brain as a computer, for example.”

The main goal of these information processes is stability, or convergence towards an established goal, like the guided missile that is designed to arrive at a certain target. At the same time, large command and control architectures are erected through the deployment of computing and telecommunication technologies.

“Armies that used to think in terms of command increasingly conceive of command and control. The difference is that control is continuous. You are continually receiving information that allows you to adjust the orders that you are sending through your military hierarchy. All of this makes a lot of sense in the context of the Cold War where the Soviet Union and the United States find themselves locked in a system of nuclear deterrence where they want to stabilize and balance each other and prevent their hostile relationship from getting out of control.”

The United States leads the way in the adoption of this approach, but when it deploys its cybernetic technologies in Vietnam, it encounters a serious setback.

“They use a very sophisticated command and control system, believe they are fighting a very underdeveloped military and that they are necessarily going to win. And then they find out that they are unable to prevail, that their very hierarchical system tends to get jammed, that the information doesn’t always flow to the right places, that the obsession with information sometimes produces inaccurate representations that ends up misleading the US badly about how the war is going.”

This reverse lays the ground for the last regime of the scientific way of warfare – the chaoplexic regime – which Antoine Bousquet argues we are still living in today.

“It emerges partly as a consequence of the Vietnam war, but also because of scientific ideas that are developing within the informational paradigm, pushing it beyond its original cybernetic confines.”

The word chaoplexity combines the notions of complexity and chaos that emerge through the convergence of disparate scientific studies into natural systems from the 1970s.

“It covers a lot of different fields, such as seismology, weather modelling, and the study of large animal groups. What scientists discover when they start modelling these complex systems made up of a lot of different parts, is that the computer doesn’t always gives you the predictability you necessarily expect, since you are dealing with non-linear systems that don’t act predictably.”

What the chaoplexic sciences realized is that when systems self-organize without top-down oversight, they are able to develop new, unforeseen types of adaptive behavior. In a military context, this becomes associated with an increasing interest in the power of decentralization, and the key technology becomes the network.

“These ideas start to develop in the military context in the 1980s, but particularly in the 1990s, culminating in the doctrine of network-centric warfare. They draw explicitly from chaos and complexity theory and are saying that decentralization and distribution of information will allow us to have much more adaptive militaries.”

The book, based on Antoine Bousquet’s PhD thesis, was completed in 2007, midway through the Iraq war.

“In the book I was trying to understand the importance of these new scientific ideas and how they were influencing military thinking. Notably the fact that many commentators were seeing these principles being embodied by non-state actors at that time.”

For example, Al-Qaida was seen as a decentralized organisation that was particularly difficult for western states to combat because it was able to regroup and adapt and didn’t have a centralized structure.

The swiftness of the early invasion of Iraq was initially heralded as a dramatic validation of network-centric warfare.

The only game in town

For all the influence of chaoplexic ideas on military thinking, Antoine Bousquet found that network-centric warfare was in many ways a continuation of cybernetic warfare, unable to shake its centralizing impulses and obsession with information-gathering. Iraq turned into a new Vietnam.

“This is where the book ended in 2007, and with the second edition I wanted to update the analysis and looked at what has happened since. And what I found is that chaoplexity still remains the only game in town.”

The military approaches that followed the invasion of Iraq, whether as counterinsurgency or counterterrorism, all emphasized the importance of networks and decentralization.

“Beyond Iraq and Afghanistan and moving into the era of renewed great power competition, all the latest doctrinal concepts are similarly infused by the ideas of chaoplexic warfare. Western militaries have been chasing this for 20-30 years, but its promise has never been realized. Yet states keep going back to it.”

Antoine Bousquet proposes that there is a fundamental tension here. Militaries are drawn to the idea that they want to be decentralized, horizontal and adaptive organisations. But at the same time the fundamental constraint is that they remain state militaries.

“State organisations are not horizontal networks, they are innately hierarchical. And if an organised military became horizontal, it might become something completely different, and maybe we wouldn’t like that. It would not even necessarily be a compliant instrument of the state at that point. So perhaps this chaoplexic regime can never be realized because it’s constantly rubbing against the inherent nature of a state organisation? And a fully chaoplexic army might be something we don’t really want to see.”

The Scientific Way of Warfare: Order and Chaos on the Battlefields of Modernity, 2nd edition, by Antoine Bousquet. Hurst Publishers & Oxford University Press (2022).

New study on narrative-based influence operations Influence operations can be effective even when the disseminated message is not logical or consistent with the recipient's previou...
Information operations of influence have less impact than we think In a new review article, Claes Wallenius, Senior Lecturer in Leadership and Command and Control at the Swedish Defence University,...
“The biggest challenge is the information flow” The international staff exercise VIKING 22 has been completed with over 2,000 participants from five different countries. The main...