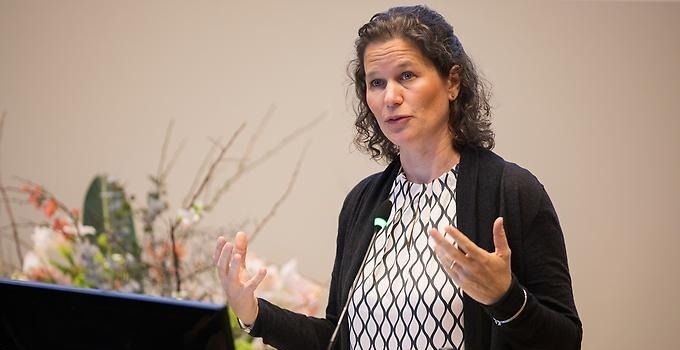 The Swedish Defence University’s research group on Gender, Peace and Security is an arena for both researchers and students who are interested in gender and feminist perspectives. The group is led by Professor Annick Wibben's research team at the Department of War Studies and Military History.

In January 2019, Annick Wibben was appointed as the inaugural Anna Lindh Professor for Gender, Peace and Security at the Swedish Defence University. Within the framework of the professorship’s research area, she leads a research team at the Department of War Studies and Military History that aims to develop the Swedish Defence University's research and education in gender, peace and security.

“We want to contribute with innovative perspectives in this dynamic research area both nationally and internationally, and at the same time strengthen the research environment internally at the Swedish Defence University. We also aim to strengthen the university's presence in international research debates and create collaborations within both practitioners and policy communities”, says Annick Wibben.

Jenny Hedström researches the relationship between gender and civil war with a focus on Myanmar, while Leena Vastapuu has conducted ethnographic research on girl and women soldiers in Liberia. Emma Fredriksson's dissertation analyzes war preparedness and the structure of the Swedish defense since 2014 from a feminist perspective and Elin Berg, who is about to begin her Ph. D. project, is interested in LGBTQ issues and gender integration in the Swedish Armed Forces.

“These are good examples which show that gender research does not mean that we only study women all the time. The research area has a broad scope and gender affects all aspects of what we do at the Swedish defence University", says Annick Wibben.

Over the past three years, the team has fostered an interdisciplinary research environment at the Swedish Defence University - the Gender, Peace and Security Research Group - which is housed in War Studies, but is open to everyone. The broader research environment is an arena for both researchers and students interested to explore how gender and feminist perspectives are applied within the field of defense, crisis management and security.

“Here, those who are interested can exchange ideas and knowledge about gender research and explore themes such as peace, war, security and justice from a feminist perspective”, says Emma Fredriksson.

The team arranges reading groups, workshops, research seminars and open lectures. During the autumn semester, the team organized two open guest lectures and a conversation about feminist research where the members presented their current research projects.

“We have seen a great interest, both among students and staff at the Swedish Defence University, and our events have been well attended”, says Annick Wibben.

Longer term, the group also plans to help integrate a gender perspective throughout the courses taught at the Swedish Defence University and increase the number of gender-oriented courses.

“This is something that takes time, but we already have an elective course in the master's program in politics, security and war and supervise degree projects in the research area. In addition, the members of the research group, and others active in the research environment, have integrated a gender perspective into other courses they teach. Recently, we have also started to develop material for the Advanced Command and Staff Programme, so it is underway”, says Annick Wibben.

A womans place in War Studies

"Unique environment for research on gender, peace and security"