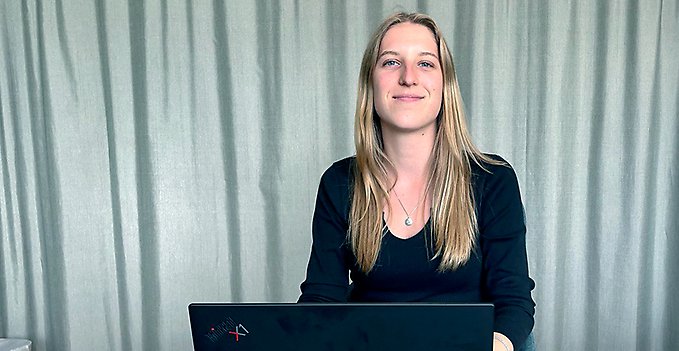 Annemarijn Kamp has followed her gut feeling throughout her studies. That feeling has taken her all the way from psychology studies in the Netherlands, via the Swedish Defence University and the Master’s programme Politics, Security and War, to a position as cyber security consultant at the international audit, tax and advisory services firm KPMG in Sweden.

You are from the Netherlands – how did you find the Swedish Defence University?

– I have a Bachelor’s degree in international relations, law and psychology, so I have a broad background. During my final year, I went on an exchange to Sydney in Australia to study international security related to technology and science – the tech aspect of it. There, I met two Swedish girls, who planted the idea of studying in Sweden. I ended up googling “security studies Sweden”, and naturally, the Swedish Defence University came up.

What made you apply?

– I really liked how the programme seemed and immediately appreciated the fact that you get both the civil and the military perspective during the security studies. In parallel, I was looking at a similar Master’s programme in The Hague, but it was only one year. Politics, Security and War in Sweden was two years and included an internship, and that was exactly what I was looking for.

– I still remember when I received the happy news that I was accepted. I was on holiday, on a train between Poland and Hungary, and was both very surprised and very stressed, because I now needed to find housing in Stockholm. I continued my journey to Budapest, only to end up in an Airbnb apartment where I shared kitchen with a Swede. He helped me, and I stayed with his niece until I got my student dorm. Things just fell into place.

What expectations did you have for the Master’s programme?

– I had only taken two courses in security studies until then, but already knew that I wanted to explore the subject matter, and for example get into crisis management theory. I really wanted to get into security studies as a field, and to complete a full programme.

– I really hadn’t thought of anything after the Master’s programme. I went with my gut feeling without having a concrete position or idea of my future career in mind.

– The Swedish Defence University is a nice environment. You study together and hang out at the library or at the student bar “Mässen”. Being used to a small, liberal arts school in the Netherlands, the Swedish Defence University was quite different for me. Just a simple thing like seeing people in uniform, I wasn’t used to that. One day I even ran into some Dutch military officers, who were visiting for a collaboration with the Defence University. Altogether, it was very positive. And I learned a lot from getting that perspective of the military, it added to the experience.

Any advice on how to get to know Swedes?

– As Dutch, I find Swedes similar culture-wise. Both countries have a Protestant, “don’t be too crazy” attitude, very down to earth. But Swedes are more reluctant to leave their own bubble. If they already have a social network, they don’t look outside for more friends, simply because they are already set. My advice would be to not be afraid to take up some space. The Swedes might be a bit reluctant at first, but don’t let that discourage you, rather wear them down!

What would you like to say to other international students who are considering applying to the Swedish Defence University?

– I would say that this is super interesting and an enriching experience. If you are afraid of moving, don’t be. Your country isn’t going anywhere, you can always go back.

What have you appreciated the most about the programme?

– Out of all the good things, I would say the other students in my class. They made my studies both fun and challenging. In general, because they had such different and interesting degrees, backgrounds, perspectives and experiences. Many of them had already worked professionally, including people who had been in the military and now pursued their academic career, and I was by far the youngest in the classroom. It was great to just listen to what they brought to the table.

What would you say that the programme has prepared you for?

– How to learn. To quickly summarize large amounts of information, analyse information in a structured way, and not only presenting the material to your peers, but also to people who don’t know the topic.

Tell us about your internship at the Swedish energy company Vattenfall.

– I really got the best out of two worlds, Vattenfall operates in the Netherlands as well, so I got to work with the Dutch security organisation too. I ended up having both a Dutch and a Swedish supervisor and participated in both Swedish and Dutch projects.

And it was during this internship that you became interested in your current professional field, cyber security?

– Yes, in corporate security and in the risks that come with having a business these days. I had just joined the Swedish Defence University’s national competition Cyber Challenge, where your team takes on a fictional case. I had already done a couple of papers on the topic, but from this point on, I really started to explore cyber security. During my internship I got to talk to a lot of professionals on this hot topic. Being a social sciences major, having my curiosity outlook and loving a challenge, it was simply irresistible…

– Yes, I started looking at jobs at the end of my internship, primarily in the field of risk management and cyber security in the Netherlands. Then I came across this position in cyber security at KPMG in Stockholm. You had to speak Swedish, but it really felt more like a suggestion than a requirement.

– As part of the interview process, they asked me to analyse and give my thoughts on a cyber security case. To be honest, this field still felt new to me, but I guess I had picked up a few things during my internship. And just in general, a lot of principles from Crisis Management are relevant, as well as all the general skills, like doing research. The Defence University had prepared me. But having to present something myself was new to me.

– I got the position and started working in September 2021. I wasn’t expecting that, but I guess that’s what I normally don’t. I tend to always keep expectations low, so that you can only get happily surprised.

Tell us about your position – what do you do as cyber security consultant?

– I work together with clients to help solve cyber security related problems, often including branches of companies in different countries. I can’t get into details, but generally, they come to us to improve their cyber security. So mainly, it’s about trying to understand what a client needs and help them understand where they are exposed to risks. You can have all the firewalls in the world, but it often comes down to the employees, to us as individuals and how we behave in and handle the digital landscape. As a consultant, I create and present roadmaps to overcome and mitigate the risks.

Where do you see yourself in the future? Is there a dream position that you are heading for?

– I have always followed my gut feeling and my interests. I can see myself living in Sweden for as long as I enjoy my life and my work. I know that I want to keep exploring the field of cyber security. The more I learn, the more interested I become in related subjects. At some point, I might like to work for a governmental organisation, but for now, I am happy to be right where I am and fully enjoy the ride. I like to think that I can contribute quite a lot too.

Do you have use for your previous psychology studies?

– Oh yes. Psychology comes in handy everywhere. It always helps to understand people. I wrote my Master’s thesis on learning processes. In my current position within cyber security, a lot has to do with security culture and knowing how learning processes work. We need to see the process behind decisions, and where people are coming from. In this, I feel that I have an insight on why people behave a certain way. People are people, including not only the users of technological solutions, but also the people that create them. I have the advantage of having studied how they function.

Programmes at the Swedish Defence University