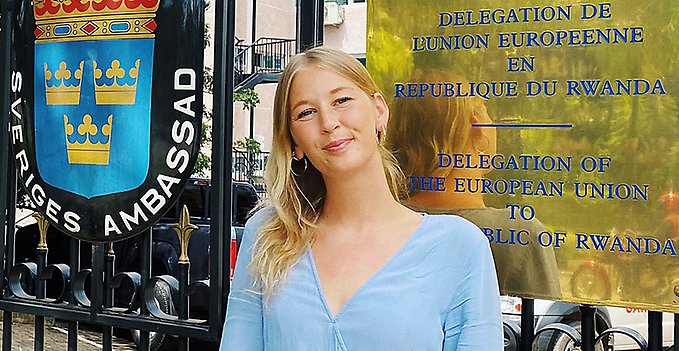 All roads lead to Africa – and Ellinore Eriksson herself has made that happen. Following her Master of Political Science degree, she applied for the Swedish Defence University’s Master’s programme Politics, Security and War with the dream of working internationally – and most of all in Africa. She is now completing the Master’s programme’s concluding internship term at Sweden’s embassy in Kigali, Rwanda. That will be followed by a temporary job in Senegal with the United Nations Office on Drugs and Crime.

You can hear birds singing in the background when we reach Ellinore Eriksson on the phone. She’s sitting outdoors on her veranda, looking out over the residential areas of Kigali.

“My interest in Africa stems, on the one hand, from a wish to understand the continent’s complex and at times dark history with slavery and colonialism. This understanding is fundamental for grasping the conflict dynamics. On a personal level, I appreciate the different pace and absorbing new cultures and traditions.”

She describes how this interest also has brought about a reawakening in questioning her own view of the world and examining her privileged status.

“For me, growing up in Sweden, with peaceful relations, there has always been a fascination over how unexplainable wars and their implications are. I’m especially struck by civil wars. How can you as a country carry on afterwards? What happens to people in and after a conflict and what happens to society?”

The internship of her dream appeared

The Master’s programme Politics, Security and War was a self-evident continuation of her Master of Political Science degree from Stockholm University. When she wrote her thesis about conflict-related sexual violence, she came in contact with both research and researchers from the Swedish Defence University. Weighed together with the positive views from acquaintances the choice was simple. She applied for the Political Science Track since the societal perspective attracted her the most.

When the internship term was approaching, her goal and dream of working internationally became tangible in a wish to intern at an embassy and learn more about the diplomatic service. Vacancies were posted but these were only in Europe and at the UN in New York.

“I was disappointed since I really wanted to go to Africa. And then suddenly there were posts both in Pretoria and in Kigali. I applied for the post at the Swedish Embassy in Rwanda, got it and that felt so absolutely right. The Covid pandemic threatened to jeopardise all of it but Rwanda has an 80-percent vaccination rate so the embassy decided to go ahead with the internship.”

Which internship could be better suited for someone with an interest in how to make a society work after a civil war? In Rwanda’s case that is extreme. During the widespread genocide in 1994 nearly one million people were murdered and more than two million fled the country. However, Ellinore Eriksson describes Rwanda at present as a safe, orderly and stable society.

“With history in mind it’s easy to only associate Rwanda with violent killings but today it’s something different. The country is very well organised. Here in Kigali, I have a 30-minute walk to the Swedish Embassy and I always feel safe, also during evenings. I’ve lived in Paris and I actually feel much safer here. There is a lot of greenery and it’s simple to live here with its small-town atmosphere in spite of the fact that Kigali is a million-inhabitant city.”

She describes Rwanda as a country where things are covered up and where you generally don’t publicly speak about what has happened. People express great gratitude towards the government, which has built the country to become a healthy “Singapore of Africa” through investments in, for example, internet and IT. However, a large part of the population still live in poverty and most are farmers.

“Considering the past, they’ve come extremely far. People are calm and avoid conflicts. They want to progress from “aid to trade” and that’s something we notice at the Swedish Embassy.”

Sweden has been present in Kigali since the end of the 1990s and developed from a purely foreign aid office to an embassy to underline that the two countries are equal partners that collaborate through trade and relations. Swedish companies are highly interested in establishing collaboration and a Rwandan delegation will soon visit Sweden.

“Rwanda is very interested in Sweden’s climate action and will study our waste management and, for example, our use of biogas buses. If you’ve travelled to other parts of Africa, you notice that it’s very clean here and it’s evident these are issues that they’re interested in.”

Ellinore Eriksson is in the midst of her major area of interest in how a society is affected and can move on after a civil war. In this internship she gets her first experience of working in public administration among the approximately 20 staff members.

“Since the Swedish Ministry for Foreign Affairs is a hierarchical organisation, I had in some way expected that the embassy would be characterised by prestige and position. I was completely wrong because, instead, I arrived at a flat organisation with a warm and open atmosphere. I’m very well taken care of, and get a lot of responsibility and manage my own work.”

She works at the political affairs section and against her background in the Master’s programme she is assigned to monitor relations, the regional dynamics and security situation in the region and keep the embassy updated concerning the situation through internal reports. External monitoring by absorbing all available sources, summarising the situation and providing a correct and well-balanced picture.

“We also monitor the conflict situation in the country at the micro level, in other words in view of the country’s history what is spoken about between people. We must continuously monitor conflict dynamics and assess whether the situation is calm or can flare up. There’s a lot happening all the time. This is not a country where things are static.”

A Swedish agenda must be pursued but with respect for the national culture. In daily work she supports the political rapporteur, which also includes working with trade promotion and help planning visits by delegations from Sweden to start business operations in Rwanda. Early in her internship she also participated in a visit by the Swedish Minister for International Development Cooperation, Matilda Ernkrans.

“That entailed everything from setting up a programme with key stakeholders in Rwanda to practical things such as checking the security situation and joining the security service guards to the various places that the Minister would visit.”

Taste for more and dreams of diplomacy

Security studies often focus on the major global countries. Rwanda can hardly be counted among these with its population of 13 million. But size is not the same as the opportunity to capture attention and fascinate. The internship has strengthened dreams of continuing to work internationally and highlighted a role in diplomacy as a specific goal.

“This is one of the world’s smallest countries and it’s really fascinating to be able to dig into what’s happening here and get to learn more deeply about a country with such a complicated history. The work is fantastic and has most certainly sparked an urge for more. It’s difficult to gain employment at embassies. Usually, you need to have attended the diplomat trainee programme. But now I have a goal to work towards.”

Assignment for the UN in Senegal

It is already clear that Ellinore Eriksson will remain in Africa – in any case over the coming year at the United Nations Office on Drugs and crime, UNODC.

“To my great fortune, the Swedish International Development Cooperation Agency has the aim of getting more Swedes to join the UN system. My title, Associate Officer, is the most junior entry position in UNDOC. I’ll be working with the anti-corruption programmes that the agency manages in West Africa. The work consists of preventing and combatting corruption, strengthening the justice system and democratic institutions in order to counteract a development whereby democracy is seen a worse alternative. It’s incredibly exciting but difficult, considering what’s happening in, for example, the Sahel region in countries such as Mali and Burkina Faso.”

Perhaps she will stay in Africa longer than the coming year. Her dream job is actually a post as diplomat in Africa even though she is reluctant not to restrict herself to firm plans.

“I know how life can change and how small choices can lead further along the set path and open new doors. Thanks to my internship I’m certain that I have something useful to bring.”

Ellinore Eriksson on the Master’s programme

Why did you choose the Master’s programme Politics, Security and War at SEDU?

“It was the self-evident continuation after my Master of Political Science from Stockholm University. When I wrote my thesis about conflict-related sexual violence, I came in contact with both research and researchers from the Swedish Defence University. Weighed together with the positive views from acquaintances the choice was simple. I applied for the Political Science Track since the societal perspective attracted me the most.”

How did you tailor the Master’s programme for the dream of working internationally?

“The Master’s programme opens an entire area and provides the opportunity to focus with elective courses, thesis and internship. Since I’d always dreamed of working internationally, I chose an exchange term at Sciences Po in Paris when we had elective courses and studied courses from their Master’s programme International Security. Their approach is more hands-on and practical. Instead of academic essays we worked with scenarios and writing policy proposals, and that was a good supplement. Here, I met many others heading for the world. That strengthened me and I realised that my dream was actually achievable.”

“I also tried to set the stage for my dream in other ways as well. Because of the covid pandemic certain education was unfortunately carried out as distance learning. I turned that into something positive and studied from France. I figured that fluent French would facilitate realising my dream of an international career.”

What are your most important learnings from the Master’s programme?

“The insights and specialisation on different perspectives on conflict and security that you gain. The lecturers and researchers are extremely skilled and your classmates are highly knowledgeable. Those that apply are really sharp. We have the same fundamental interest but that becomes especially interesting when our special interests meet. I’m more into diplomacy and Africa, others are interested in European security, some are looking at Asia and China, others have a military background and skills in war strategies or defence technology. I believe and hope that we’ll meet further along in our professional lives.”

What was the topic of your Master’s thesis?

“I carried out a quantitative study examining whether civil war with a clear and unequivocal winner leads to more or less political repression after the end of the conflict. I was confused by the fact that there was research that showed that a clear winner – such as the military or the rebels – leads to a more peaceful society. One idea could otherwise be that greater consent leads to a more peaceful coexistence. When examining the issue quantitatively, I found that it’s usually less complicated conflicts with fewer actors that end with an unequivocal victory and therefore that the road to a society in peace in simpler. Thus, the hypothesis that conflicts that end through agreements such as peace accords lead to less political repression following the cessation of hostilities was not valid.”