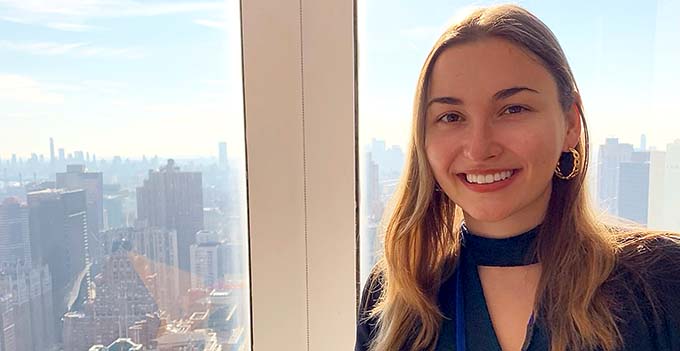 From Uppsala to New York, and an internship on the 46th floor of the UN skyscraper. The Master’s programme Politics, Security and War has been what Ulla Lovcalic describes as the lift to the centre of world events. It proves how right she was in letting her interests guide her choice of studies.

From the flat on the Upper West Side, it takes 45 minutes for Ulla Lovcalic to take the subway and walk the final way to Dag Hammarskjöld Plaza. In the large entrance hall on the ground floor, she greets the three elderly men that each morning are on duty, crosses the gate and takes the lift to her office just two floors below the top of the building.

Having reached the 46th floor, where the Swedish Mission to the UN has its offices, she blips her way through the first security door to the lobby. Two doors and another security check-point later, she moves the marker on the board that signifies that she has arrived at work.

“We’re four interns in a large room with glass partitions in the middle. Around us the officers move about and often stay for a chat. It’s a very dynamic workplace in which we’re always involved in the work.”

Working at the artery

Ulla Lovcalic works in the area Sustainable Peace and holds responsibility for the Fifth Committee, which deals with administrative and budgetary issues and is usually seen as the UN’s artery.

“Everything that has a budgetary implication passes through the Fifth Committee, for example a peacekeeping mission or assistance to Ukraine. If the issue at hand demands anything else than a political stand and requires some form of action it must be approved here.”

Her days are primarily filled with two issues: Russia’s war against Ukraine and Security Council reforms. These two issues offer a good mix. Ukraine is urgent and she gets to experience how the UN acts in a heated situation when rapid and determined decisions are needed. The other issue is a process.

“Changes are needed. All member states agree that the Security Council doesn’t function well at present and negotiations have been going on since 2009. I gain knowledge about and insights into all positions and interests, how countries and the major powers reason, why negotiations are stalled. The differing views and possible means of going forward.”

Insights into many issues

Although the interns have specific focus areas, they gain insights into many areas. In Ulla Lovcalic’s case that has, for example, included the First Committee that deals with disarmament, global challenges and threats to peace. One day can be multilateral and the next a meeting of the UN Mission and coordination of a response to a resolution.

“The Swedish Mission is very generous in letting us try most everything. My intern colleague, who works with climate issues, also gets to follow the Security Council. If I want to learn more about the law of the sea, I can do that. Or, like the other week when there was a meeting of the Commission on the Status of Women. Sweden’s Minister for Employment and Gender Equality, Eva Nordmark, was here and gave an address and I was involved in a side event in conjunction with the meeting.”

How she found SEDU

Ulla Lovcalic’s interest in politics comes from home. Her parents, who fled the war in ex-Yugoslavia, always discussed politics and world events at the dinner table. During her years in upper secondary school, Ulla found an interest of her own in politics, and one thing rapidly led to another. Within a couple of years, she was vice-chairperson for the Liberal Youth of Sweden in Uppsala and member of the organisation’s international committee.

She became active in the International Federation of Liberal Youth, was a representative at congresses and held lectures for young liberals in the world about integration, populism, peace and security. In parallel to studying for her Master of Political Science, she attended Försvars- och säkerhetsakademin (Defence and Security Academy), organised by Folk och Försvar, a Swedish non-governmental organisation that acts as a forum for debate on defence and national security issues.

From a distance, her direction seems clearly mapped out. Yet Ulla Lovcalic says that the idea of attending SEDU came late.

“The more active in politics I became, the more my interest in security, defence, international relations, geopolitics and why wars start developed. But it was first when I was approaching the end of my studies for Master of Political Science that I discovered SEDU and the Master’s programme Politics, Security and War. That was spot on.”

“I realised that I only wanted to study for a Master’s in my interests. If I hadn’t been accepted, I would have taken a job and applied again.”

Initially, she needed one assurance. She wants to keep an open door to research and needed to ensure that the Master’s education had a sufficient theoretical content.

“I heard that there has been a brain drain from Uppsala University whereby several research lecturers in crisis management and defence had just moved to SEDU, including a researcher in China Studies that I knew of. That calmed me with the certainty that my studies would be considered as strong in theory.”

Already the introductory course on Politics and Security with Tom Lundborg lived up to her expectations.

“I immediately felt that this was serious, at an international level. And the Master’s programme has continued to meet all my expectations. So, my advice to everyone is: apply if you’re interested in security issues.”

Some select courses strategically in order to build a certain profile for the labour market. Ulla Lovcalic has let feelings and interests guide her. That has been Terrorism Studies with Magnus Ranstorp, the Nordic countries defence polices with Håkan Edström, European Crisis Management with Magnus Ekegren and the Rise of China with Stephanie Winkler. The course on China made an especially great impression. During an exercise with a week-long simulation, she was assigned China.

“It was a very creative way of learning. During the game we received scenarios whereby we would act as the assigned country. How had China reacted in this situation? I recall the final presentation in front of a large audience, a simulated international arena.”

Finishes with the internship of her dreams

The final term can consist of elective courses but Ulla Lovcalic chose an internship. SEDU had posted the internship at the Swedish Mission to the UN and she applied. And we know how that ended – with an international arena. It has given her a taste for more. When the internship ends, Ulla Lovcalic will return to Sweden but she is open to several types of international traineeships or a job in autumn at the UN Headquarters or in Brussels.

When asked about future dream jobs many envision something specific. Ulla Lovcalic’s reply is as expected.

“My dream job is in my favourite issues: international cooperation in security and defence. These you can pursue in many different places, such as within the UN, in the EU, NATO, the Swedish Armed Forces, at a think tank or in PhD studies. As long as it’s about my issues, it’s interesting for me.”

“This isn’t an interest or some sideshow. Politics, security and defence are my life.”