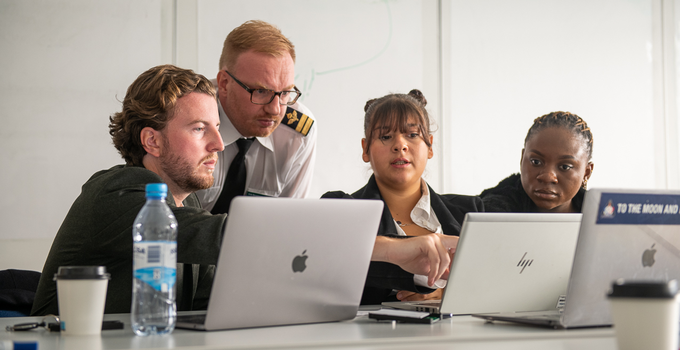 War games sharpen skills for a career as a legal advisor

In the Master's programme International Operational Law, the students take part in a joint scenario exercise together with officers from the Senior Officers Program. When we visited the exercise the siege of Mariupol was in focus.

Victor Melin is one of the students in the master's program in International Operational Law. For him, exercise is a new concept.

– It was a very good exercise. If, like me, you want to work as a legal advisor in the future, this was a fantastic way to get a taste of what I can use my education for, he says.

Scenario from the war in Ukraine

In preparation of the exercise, officers and law students were divided into ten groups, each with different missions based on scenarios taken from wartime Ukraine. Some groups were tasked to act as Russia, with the task of seizing the Azovstal Steel Plant and its surroundings and siege the Azovstal area. The task includes to consider consequences such as evacuation of residents, handover negotiations, humanitarian work and famine.

Other groups were tasked with seizing control over areas in and around Mariupol and shutting down the port of Mariupol. That includeed mitigating security risks and preventing weapons from reaching Ukrainian forces by occupying certain areas and maritime interception.

Other groups acted as Ukraine and were tasled to conduct armed resistance or take passive precautions in areas under Russian control. One group negotiated surrender and another group planned Red Cross operations. The aim was to discuss different courses of action based on the scenarios above while adhering to the laws of armed conflict.

– There are many of us who have a growing concern regarding the development of events in the Ukraine war, the gross warfare on the part of Russia really illustrates the need and importance of international law, says Victor Melin.

The goal of the joint exercise is for the law students to apply their knowledge by solving given problems together with officers who have practical experience in practicing and planning operations.

– Our task was to act as legal advisers. Rather than identifying legal barriers to efforts or suggested by the officers, we worked on applying the law to reach good results together

Dr. Jann Kleffner is a Professor of International Law at the Swedish Defence University, SEDU, and responsible for the course Advanced Law of Armed Conflict, in which the exercise is part. He explains that practical application of the knowledge is very important as the programme is designed as a practice-informed programme that prepares students for a career in international operational law.

– Practical application of their knowledge is pivotal in achieving that aim. In addition, interaction with military planners is crucial to develop an understanding of operational planning and the role that law and legal advisors play in that context.

Practical applications, exercises, and games are also included in other courses in the programme. For interested students, there is also an elective course on international operational law and operational planning, which includes several exercises.