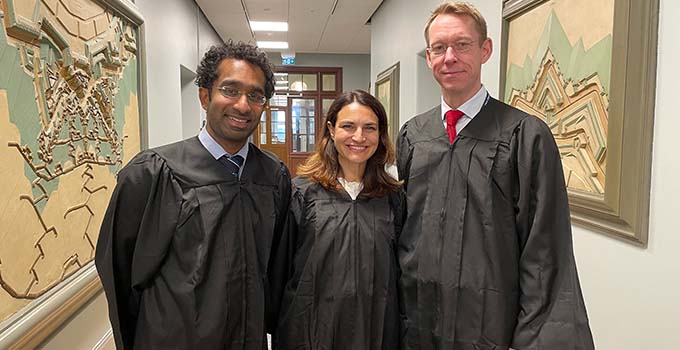 In this fictitious war crimes trial, international law students get to assume the roles of prosecutors and defence lawyers and plead before the International Criminal Court (ICC)'s bench. Although the course of events discussed is fictional, the judges on the bench are very real.

Several years ago, during a Taliban attack with shelling, a fateful decision was made, resulting in eleven civilian casualties. Today, at the Swedish Defence University, students at the LLM Programme in International Operational Law take on the challenge. As prosecutors and defence lawyers, they plead the case to International Criminal Court (ICC) judges in a fictional war crimes moot court trial hearing.

It was in a village in Helmand province, Afghanistan, that a fateful battlefield decision was made. Danish Company Commander Claus Michael Pedersen found himself and his infantry platoon ambushed under heavy enemy fire.

Pedersen requests an airstrike on the location where he suspects his Taliban hostiles are firing – but without a visual positive identification. The airstrike successfully repels the assault and enables Pedersen’s men to evacuate.

However, it is later revealed that the strike also resulted in the death of eleven civilians. Back in Copenhagen, a criminal court tries – and acquits – Pedersen of one war crimes charge brought under Danish military law.

This is the story told in the critically-acclaimed Danish film “A War” – and forms the framework for this day. The students have watched the fictional film and will now, together with invited judges bring the story to another level by adding an episode.

Today, the ICC wishes to determine whether it can also try Petersen on two counts of war crimes under its own statute. The exercise emulates a situation whereby the ICC’s fictional pre-trial chamber hears arguments presented by the ICC’s prosecutor and Pedersen’s defence lawyers on four pre-designed issues:

In honour of the occasion – prominent judges arrive from The Hague

Although the chain of events are fictional, the judges on the bench are very real. And even more so. Thanks to a well-established exchange and collaboration among the Swedish Defence University and practitioners of international criminal law, three international superstars have arrived from The Hague and donned in their black, full-length robes meet the students.

Their role is not to pass judgement on Pedersen’s guilt. Rather, they are asked to listen attentively to the students’ arguments, interrupt for clarification or challenge or to ask them to elaborate arguments and provide feedback to the participants.

The Swedish Defence University has a long educational tradition in organising role play and scenario-based exercises that emulate actual occurrences and offer the opportunity for students to assume roles that they will later encounter in their professional careers.

This exercise was created by Nobuo Hayashi, Associate Senior Lecturer at the Centre for International and Operational Law at the Swedish Defence University. The moot court hearing forms a non-graded, extracurricular extension of a course on international criminal law that he is currently teaching.

– My idea is that this is a genuinely fun and exciting occasion where our students get to showcase the fruits of their learning in this course to the university’s wider community. On a day like this, I want the audience to witness high-quality exchanges on interesting questions of law and fact. And the students to grow.

Well-prepared students need to rise to the occasion

The students are already closely familiar with the facts of the case, the specific arguments that should be made both by the prosecutors and for the defence attorneys, and the precise order of the proceedings.

– What nobody knows at this point is the kind of questions the judges will find themselves asking. That all depends on how each advocate presents his or her arguments, and how skilfully he or she handles the judges’ questions.

The proceedings start and the silence prevails as Nobuo Hayashi in his role as Registrar starts the day with: “The International Criminal Court is now in session. L’audience de la Cour pénal internationale est ouverte.”

President Yasmin Naqvi, in the centre seat on the judges’ bench, asks the Registrar to call the case, and the atmosphere is convincing when the Registrar explains that this hearing concerns the Situation in the Islamic Republic of Afghanistan, in the Case of The Prosecutor versus Claus Michael Pedersen, Case No. ICC-00/00-00/00”. And says that “For the record, we are in open session.”

When President Naqvi reciprocates “Thank you, Mr. Registrar. May I have the appearances of the parties, starting with the Prosecution?”, it is time for the student Emuesiri Sarah Akpere, who is Lead Counsel for the Prosecution, to bid Madam President good morning and we are off.

The eight students who have volunteered to be today’s oralists raise their backs and, in turn, present their arguments, all in line with an actual formal proceeding.

The trial as an entertaining drama

The judges listen carefully and interrupt the pleadings with legal and factual questions, which cause both the attentive audience and the oralists a bit of discomfort. It is so silent that you could hear a pin falling when the student plead their case, clarify just why they have decided to refer to a certain paragraph or why they have omitted an argument. There are most likely nerves at play but the students undoubtedly enjoy the moment.

During the preparations, Nobuo Hayashi has noted that one of mooting’s most enduring appeals is its theatrics. There are a great deal of similarities between mooting in a courtroom and acting on stage. So why not embrace the spotlight while acting before intimidating-looking judges with impressive acumens and fielding their questions elegantly for all to hear?

It is a good exercise because it takes the law out of the students' course literature and makes it come alive.

– Nobuo Hayashi, lecturer in International Operational Law at the Swedish Defence University. "Role-playing takes the law out of the textbooks", read the interview with Nobuo Hayashi

A couple of hours later, the judges summarise the session with feedback on each of the oralists and their argumentation, and also comment upon the issues raised and how the judges themselves would have handled and approached them, being in the student’s position. The students are also free to ask questions.

Emuesiri Sarah Akpere from Nigeria has worked as a human rights and general litigation lawyer, before establishing her own law firm Temstone Legal in Nigeria. Now, she is in Stockholm for the one-year LLM Programme in International Operational Law. She admits being a bit nervous, but she never hesitated once she got the chance to participate.

– It was surreal. Appearing before an international court is a life-long memory. I chose to participate because I love a good challenge, and an avenue to practice real advocacy. I could also test my arguments through legal fire. I gained deeper understanding of the concepts and how international criminal law works in reality. I would recommend this program to African lawyers and military personnel, as there is a huge gap between the knowledge and what is currently obtainable.

Swede Lisa Petersson, who was Lead Counsel for the Defence, joined the LLM Programme in International Operational Law straight from law school and was equally content with the outcome of the hearing.

– You seldom get chances like this, when conducted in a relaxed manner and as a learning opportunity. It was both tricky and rewarding to speak with my teammates on how we wanted to approach the four issues that were the topic of the exercise. You really had to choose your battles and stick to them. The judges did their part very well and really challenged us.

Lisa Petersson feels that practical exercises such as these as highly valuable because they allows her to observe the law from another angle and obtain new perspectives.

– The law is not only letters on a paper or a phenomenon that exists in a vacuum; it has to be developed. It is more dynamic than most people could ever imagine.

Read also: Emma played the role of defence lawyer in the role play with the ICC judges

The International Criminal Court's (ICC) bench was composed of the following distinguished judges:

Judge Yasmin Naqvi (Australia), who plays the role of President of Pre-Trial Chamber I.
Dr Naqvi is currently the Special Advisor to the Deputy Director-General of the Organisation for the Prohibition of Chemical Weapons in The Hague. She previously worked at the International Residual Mechanism for Criminal Tribunals, the International Criminal Tribunal for the Former Yugoslavia, the ICC, the Office of the UN High Commissioner for Human Rights, and the International Committee of the Red Cross. She holds a PhD and a Master’s degree in international law from the Graduate Institute in Geneva and an LLB from the University of Tasmania.

Judge Philip Dygéus (Sweden).
LtCol Dygéus, of the Swedish Marine Corps, is currently a lecturer of international law at the Swedish Defence University and the legal advisor on international humanitarian law assigned to the Swedish Armed Forces headquarters. He previously worked at the ICC for the former Yugoslavia, the European External Action Service and the Office of the High Representative for Bosnia and Herzegovina. He holds a Swedish law degree with a specialisation in international law and an LLM in international criminal law.